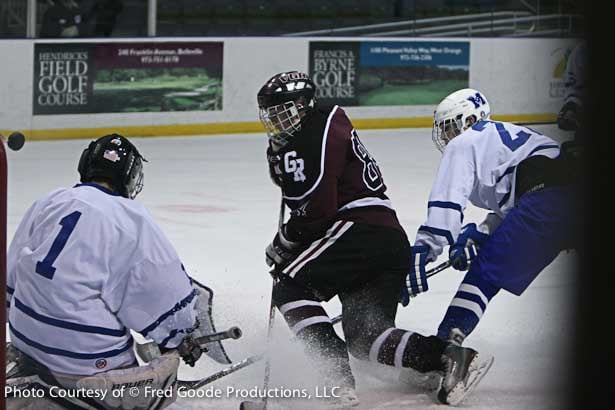 Coming off a 7-2 win against division rival West Essex, the Verona -Ridge Hockey team was ready for Millburn, and they capitalized with a commanding 12-5 win.

Glen Ridge senior and Co-Captain Matt Lander started the night off right and fast with a goal less than a minute into the game. This would be the first of four goals that he would put in the back of the net. Lander also had two assists. Verona freshmen Jake Paganelli had a hat trick as well and an assist.

To add to the amount of different players who scored is Glen Ridge senior Max Linnett who had two goals and junior Michael Lloyd had one. This was VGR’s second defeat of Millburn this season; they scored a 9-3 victory on January 14. More importantly, this game was a game of firsts. Glen Ridge sophomore Sam Dobbs and Verona sophomore Sean Gluzberg had their first varsity goals of their career. Even with a big lead, tempers flared in the third period: Verona junior Bobby Maguire and his Millburn counterpart each got a 5-minute penalty in the closing minutes, which forced both players to leave the ice.

Verona senior goaltender Matt Brehne played the first two periods, and Glen Ridge junior Jake Biondi took over for him in the third. Verona sophomore Dylan DeCandia had four assists throughout the course of the game.

Despite VGR’s commanding offense, Millburn’s Pikus brothers—John and Philip—had a combined three goals and four assists. VGR’s next game will be played on Friday, February 10, against Roxbury at 8:30 p.m. at Codey Arena.