Friday Poll: Pajamas In School Or Not? 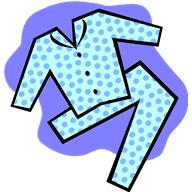 Growing up, I wasn’t allowed to wear jeans to school like everyone else. Sometime in high school though, I began sneaking out of the house in them, but only on Fridays. Today, I live in jeans and so do my kids. They hold up well for wiping hands, spilling food, and thankfully frequent washing. But I draw the line there and, like my mother, I have some rules when it comes to pants. No sweats to school, and “Verona” pajama pants only on school spirit days. But, I think I’m the exception, not the example. And my kids aren’t the only ones telling me this.

Last weekend, the Wall Street Journal reported that pajama pants in school are more popular than ever. However, the story tells of one principal in Vermont who has banned pajama bottoms and slippers because students look like they are going to bed and lack motivation to succeed.
[polldaddy poll=5881499]

I find myself agreeing with that educator. But like I said, I think I’m the exception. What do you think?