Crock It! Slow-Cooked Pork with Fennel, Carrots, and Onion 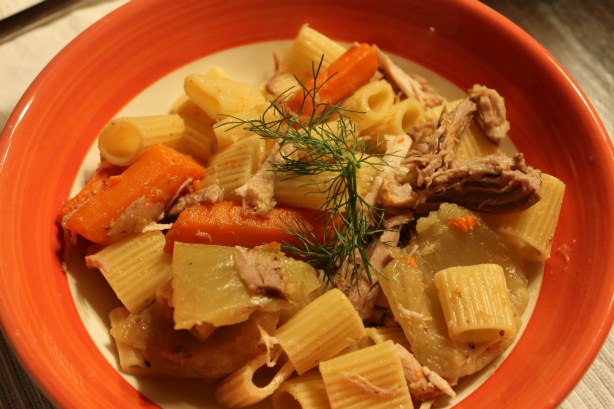 I can honestly say that this is the first time I’ve ever cooked with fennel. I’ve used the seed before, but never the bulb. Fennel looks kind of like celery with a bigger bottom and fronds at the top that look like dill. It has a black licorice-type smell, which probably explains why I have never really cooked with it before. (I’m not a fan of black licorice).

I will also say that this season I’ve made more recipes with a pork shoulder (also referred to as a pork butt) than I have in past Crock It! seasons. It is quickly becoming one of my favorite cuts of meat. Here’s why: much of the fat can be trimmed before cooking, it cooks up very tender, and it’s extremely inexpensive. I typically purchase an 8-pound shoulder from Fresh Direct and it usually costs me only about $8 and change. I’m not aware of many other kinds of meat where I can get eight pounds for $8. So, in our post-holiday money-saving meal planning, I’m getting creative with pork shoulder.

This recipe fed our family of five with plenty leftover. My kids loved the mild taste of the meat and I think one of them even said, “this is the best pork you’ve ever made.” My kids like my cooking, but I don’t hear this one often.

In a large dutch oven, brown pork shoulder on all sides. Place in slow cooker.

Add onion, carrot and fennel to same pot, adding oil if necessary. Season with Italian seasoning. When vegetables are soft (after about 5-7 minutes) add to slow cooker, spreading around pork. 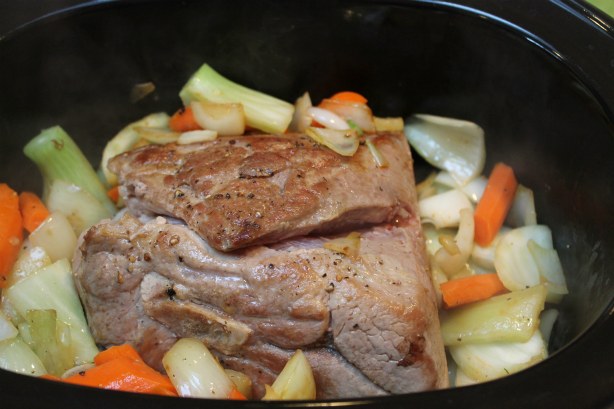 Add broth. Cover and cook on high for 5 hours.

Remove pork from slow cooker, and shred with two forks. 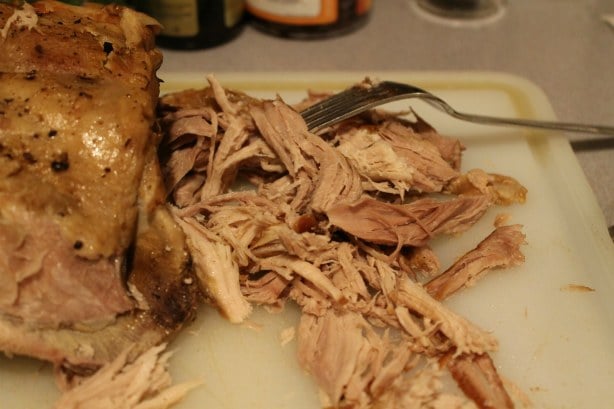 Combine pork and vegetables, discarding most of  the cooking broth. Toss with pasta (I used rigatoni) and serve.

This is a really easy meal, especially if you are feeding a lot of people or want leftovers for later.

Because the pork shoulder is a relatively large piece of meat, it’s also very forgiving. This meal could sit on the warm setting in the slow cooker for a while and not be ruined.

I would definitely make it again, adding diced tomatoes and maybe some large-leaf spinach at the end.