The Verona High School Alumni Association has announced that seven new inductees will be honored at the seventh annual Hall of Fame Dinner in February. The VHSAA says that the inductees were chosen for having demonstrated excellence in their athletic, academic, artistic or work careers, or other notable contributions. They are: 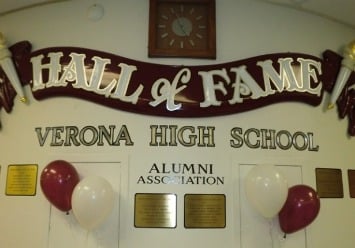 The Hall of Fame event will be held on Friday, February 17, at 6:30 p.m. at The Villa in Mountain Lakes. Tickets are $75 per person and can be ordered by e-mail from Mary Wilks at or by e-mail from the VHSAA Website. Payments can be be mailed to the VHSAA at P.O. Box 121, Verona, NJ 07044.

In November 2010, the VHSAA set up a wall in the lobby of Verona High School to honor all of its Hall of Fame inductees. Past honorees have included William “Bucky” Hatchett, Dr. Benedict LoCicero, Jay Mohr, Harry Owens, Al Rotella, George Stiefbold and others.