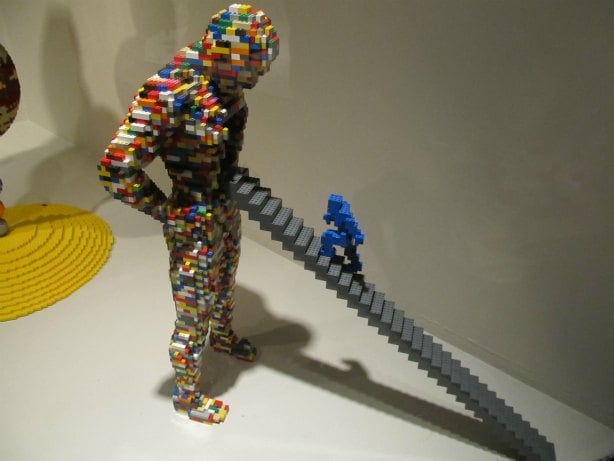 Lego fans and fanatics, you have until February 20 to get over to Morristown for one of the most unusual Lego exhibits you will likely ever see.

The Morris Museum has created a showing of more than 25 pieces by Nathan Sawaya, an artist who creates statues and portraits from, you guessed it, Legos. Big, life-size and bigger than life size statues, which have found their way into permanent museum and corporate collections around the world. And yes, he uses only the standard Lego bricks that you step on in your bare feet each morning. Sawaya abandoned a career with the eminent global law firm Winston & Strawn to become a master Lego builder and, when you see what he has created, even the strictest of parents will likely concur that it was a wise career move. 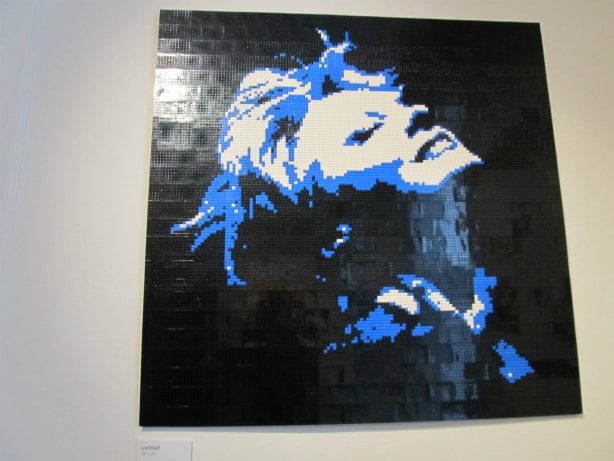 “The Art of the Brick” features an array of three-dimensional pieces that can pack a lot of meaning into a mountain of bricks. There are portraits that don’t look like portraits at all until you step back or capture them in a photo, and static structures that appear to be in motion. Your kids will simply think it is a blast and will likely never look at their brick bins the same way again. (Don’t tell them that Sawaya has a collection of more than 1.5 million Legos.)

The only criticism that we could muster of the show is that it is too small. We wanted to see more Sawaya creations, dozens more. We came home and prowled through Sawaya’s Web site and laughed at the Lego bicycle,  dolphin, and milk and cookies.

The Morris Museum is tucked into the northern corner of Morristown at the intersection of the Columbia Turnpike and Normandy Heights Road. In fact, we found that the Columbia Turnpike (the right turn after McLoone’s as you are headed south through South Mountain Reservation) is a much easier way of getting there than the museum’s suggested directions off Route 287. Tickets to the museum are $10 for adults and $7 for kids, though there is a two-for-one coupon on page 347 of the KidStuff book that we forgot to bring. The museum is open Wednesday, Friday and Saturday, from 11 a.m. to 5 p.m.; Thursday, 11 a.m. to 8 p.m.; and Sunday, and admission is free on Thursdays between 5 and 8 p.m. Once you are done with touring “The Art of the Brick”, check out the museum’s dinosaur exhibit and model trains.