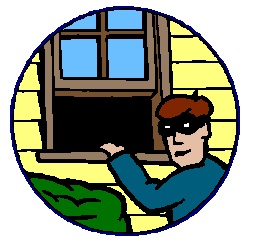 Three of Verona’s recent burglaries may have been solved yesterday afternoon when the Verona Police Department responded to a burglary alarm at a Mountain Road residence.

According to Chief Doug Huber, at about 3:52 p.m., the Verona Police got a call that an alarm had gone off. Several cars were dispatched to the home and Officer Tim Banta observed a white male walking in the area and stopped him for questioning. The officers on the scene reported a shattered glass door at the house and relayed the information to Officer Banta and Officer Robert Shafer, who was assisting him. Shafer observed glass on the man, and the officers called for the Essex County canine unit. The dog sniffed the scene and went directly down the block to where the man, who had burglary tools on his person, was being questioned.

The police arrested Andrew Goldberg, who is also known as Anthony Martinelli, 51, a Newark resident with no fixed address. The police say they were able to connect Goldberg/Martinelli with two other burglaries that have occurred in Verona in the last month. He was charged with three counts of burglary, two counts of receiving stolen property, two counts of possession of burglary tools and one count of drug paraphernalia.

Goldberg/Martinelli, who police say has been convicted of 12 previous felonies including several burglaries over the past 10 years, is currently being held in the Essex County jail in Newark on $150,000 bail.

Huber praised the officers involved in the incident. “Catching burglars is very difficult,” he said. “Lieutenant Chris Kiernan cordoned off the area, and the officers did everything the right way.” Huber also gave credit to the squad’s civilian dispatcher Carol Devlin, who dispatched the police from one line while the alarm report was still coming in on another. “She did a great job,” said Huber. “She got the guys to the house in less than two minutes.”