White Christmas, With Help From Verona 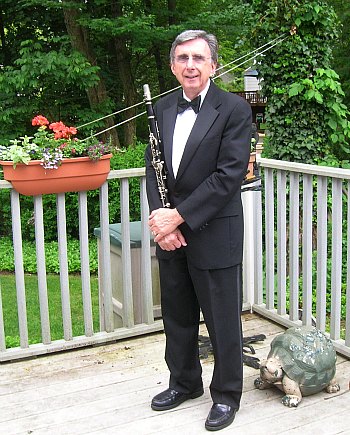 Irving Berlin’s “White Christmas”: It’s got songs, it’s got love, it’s got a tribute to the armed forces and, in the production now playing at the Paper Mill Playhouse, an orchestra musician from Verona.

Dennis Cianciosi is the other side of music in Verona. While we normally see a lot of rock and jazz, Cianciosi is a classically trained reed player who has made a career in symphonies and operas. A native of Pennsylvania who has a bachelors in music from West Chester State (now West Chester University) and a masters in clarinet performance from Catholic University, Cianciosi has played with the New Jersey Symphony Orchestra, the New Jersey State Opera and New Jersey Pops. Though the performing arts have been struggling with the rest of the economy, Cianciosi still considers himself fortunate. “I have found New Jersey to be a good place to be a performing musician,” he says.

Normally at this time of year he would be in the pit for a production of the “Nutcracker” somewhere around the state. (His wife Valerie, a professional violinist, is playing for the New Jersey Ballet’s version at the Mayo Center for the Performing Arts in Morristown.) But Cianciosi, who has lived in Verona since 1980, also knows his way around a show tune and when this fall brought a call from the Paper Mill for “White Christmas”, he answered. “I’ve been with the Playhouse for 10 years and I play half or more of the shows there every season,” he notes. He was in the pit for “Curtains” earlier this season and will likely be back in March for “Damn Yankees”.

But Verona’s student musicians might be interested to learn that their weeks and weeks of rehearsals are something of a luxury in the world of professional musicians. After Cianciosi was given the music for “White Christmas”, he had just one full day of rehearsal with the orchestra and a run-through with the actors. Then it’s eight performances packed into five days every week for the run of the show.  At the Paper Mill shows play on Wednesday through Sundays, with two shows each on Thursday, Saturday and Sundays.

With Millburn so close to Verona, Cianciosi can at least run home between performances on his double show days, but some of his fellow musicians aren’t as lucky. “I can run back home or go out to lunch,” he says. “A lot of musicians come from New York and they can’t go home.”

When he is not on stage or in an orchestra pit, Cianciosi can often be found giving private lessons. Erik Lynch, the director of Verona High School’s marching and concert bands, has brought Cianciosi in for master classes with the woodwinds and he teaches privately for students all over western Essex County. Former student Caitlin Dunleavy of Verona is on her way to graduating from the University of Maryland with a degree in clarinet performance and music education.

“Going into the performance field is a challenge,” says Cianciosi. “Most of my students become doctors, lawyers, engineers and communications professionals, but they never quite give up music.”

“White Christmas” is at the Paper Mill only through Saturday, December 24, and tickets are hard to come by.