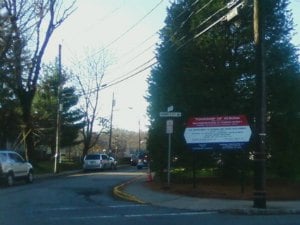 The long-awaited repair and resurfacing of Church Street is finally about to start. The sign announcing the work is up at the corner of Church and Claremont Avenue, and the street crew should arrive next Tuesday or Wednesday, weather permitting.

The work on Church Street is being funded through Community Development Block Grant monies not spent by other towns. Verona Township Engineer Jim Helb was able to secure the funds, known as reprogram dollars, after a sharp-eyed reading of some legal notices in The Star Ledger earlier this fall. Verona was awarded $175,000, but it looks like we’ll be sending some of that back to the federal government, which funds the CDBG program: The bid for the work came in at just over $148,000.

We might not be so lucky on future street work, though. Helb told the Town Council at its November 21 meeting, that Washington has been cutting funding to CDBG, and that the program’s future is “potentially in jeopardy”. Verona has received more than $6.5 million from the CDBG program since 1979. At the Council’s next meeting on December 5 it will be setting priorities for future projects, which could include improvements to Personette Avenue, Depot Street and Park Place, as well as work to make the Verona Library more handicap accessible.