A Loss That’s Still A Win 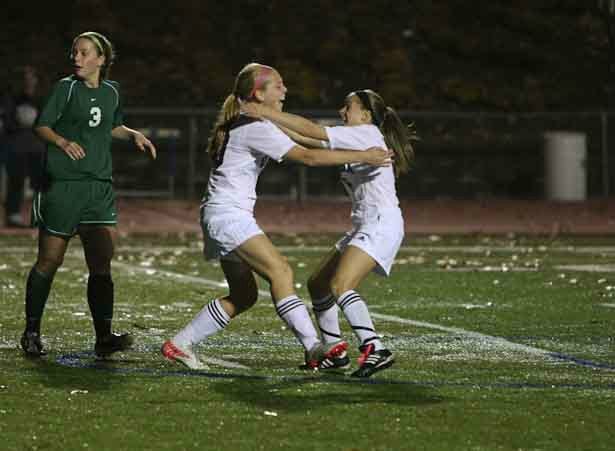 Yes, according to the official scoreboard the Verona High School girls soccer team did not win Tuesday night’s state semifinal against New Providence. But the final score, 3-2 in double overtime, doesn’t begin to reflect what the girls accomplished in the game, and the season that preceded it.

The girls were 13-8 in regular season play, and went into the North 1, Group 1 sectionals seeded ninth out of 11 teams. Still, that was noteworthy because only one other Verona girls soccer team had ever made it to sectionals.

What happened next was even more remarkable: The Verona girls picked off Pompton Lakes, the No. 1 seed, in their opening game. Olivia Marino teamed with Julia Ashley for the score, while goalie Alison Sprong locked in a shut-out. It was a shut-out again when Verona took on the No. 4 seed Cresskill. Marino put one away in that game, as did Sydney White. In the finals, Verona triumphed over No. 6 seed Midland Park in still another shut-out when Colleen Farrell scored. That earlier Verona team? It lost.

The state semifinals last night pitted Verona against New Providence, which went into the North 2, Group 1 sectionals seeded No. 1 and rolled over each of its opponents–Roselle Park, Dayton, and Glen Ridge. No hope for Verona, right? Wrong.

The Verona girls got on the scoreboard first, with a goal by Jillian Sprong at just over one minute into the game. Then Marino headed a kick from up top to put Verona up 2-0 at the 21-minute mark. All throughout the first half, the Verona team did solid job of keeping the Pioneers away from the goal.

For the many seniors on the Verona team–Colleen Carr, Amanda Cummings, Michelle Frungillo, Caroline Mols, Amelia Weiss and Alison Sprong (this week’s Verona Boosters Senior Athlete of the Week)–the game was the cap to a season they won’t soon forget. For the undergrads who have played alongside them, it was a taste of what more might lie ahead.