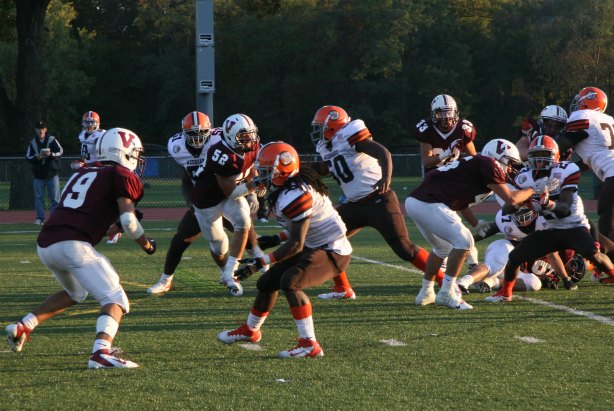 In a well-played defensive battle the Indians of Weequahic High School knocked the Verona Hillbillies out of state playoff contention. The Tuesday afternoon game, which had to be moved to Millburn High School because of the snow storm on Saturday and subsequent power outage, had the Hillbillies once again playing on the road. Verona has only played one game this season at their home turf.

The Indians took the opening kickoff and drove down the field deep into Verona territory but their scoring threat came up short when Verona stopped them on a fourth and one. Freshman QB Frank Ferrari took over and led the Hillbillies march down the field to the Weequahic six yard line. The Indian defense held tough despite a barrage of attacks from Ferrari and junior running back Frankie Greco. Facing 4th and goal on the five yard line Ferrari’s pass attempt to senior WR Billy Meade was deflected, ending the scoreless drive. Verona suffered a major setback when Meade, their top receiver and captain, suffered a game-ending injury on the play. As the first quarter ended both teams were locked at 0-0.

Once again defense was the name of the game as both teams held each other in check but that changed when Weequahic’s Patrick Watson took an inside hand-off. He breezed through the Hillbilly defense untouched and raced 60 yards for the first score of the afternoon. Michael Ramshair’s extra point sent the Hillbillies into the locker down 7-0 at halftime.

The pressure from the Indians increased at the beginning of the second half when they put six men on the defensive line to blitz the speedy Ferrari. The freshman had to work quickly and began to hit junior Captain Jack Cummings on a series of short passes before hitting WR Mike Harrington on a 30-yard strike. That set up the Hillbillies’ first score of the game when Greco scored on a three-yard rush to pull within one. The two-point conversion failed.

The final period began with the Maroon and White trailing 7-6. That changed quickly when Ferrari found a hole created by junior captain Nick Rollo, Joe Pami, Tom Cundari, Ryan Flood and Luke Weiss and raced down field deep into Indian territory. After Greco’s dazzling rush capped off by his signature spin move, Ferarri hit junior TE Luke Sniatkowski on a nine-yard TD pass to put the Hillbillies in front 12-7. Ferrari took the ball in for a successful two-point attempt and the ‘billies in front 14-7.

Weequahic struck back on a series of screen passes that resulted in a 20-yard TD pass from Will Robinson to Keith Foster. The two-point conversion was successful to put the Indians on top 15-14. The Hillbillies had one more shot at the end zone but were forced to send junior punter Mike Perri out to try to pin the Indians back in their own territory with 4:00 left. Weequahic did a great job managing the clock and Verona was never able to get the ball back, ending any hope of a playoff berth.