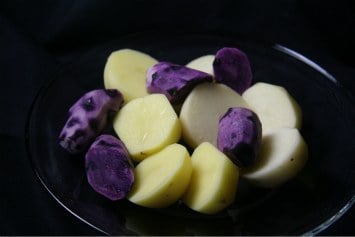 Fall is a great time to showcase foods that we really don’t get to see or use much of throughout the year. Butternut squash, and many of its winter squash relatives, provide interchangeable uses and unique flavors. I look forward to these vegetables every year and this year was no exception. I do, however, run out of ideas for new meals relatively quickly.  Thanks to Drew Gabbe, the Verona resident who owns The Fruited Plain, a catering company in Denville, this side dish was a hit in our house and some of us even had seconds! Thanks Drew!

salt and pepper to taste

Heat 1 tablespoon oil in a large skillet or dutch oven.

Brown potatoes in a single layer being careful not to let them steam.

Remove potatoes and set aside to cool.

Transfer squash to a large bowl. Allow to cool for 15 minutes.

After baking, drizzle maple syrup and sprinkle scallions. Toss to combine and serve. 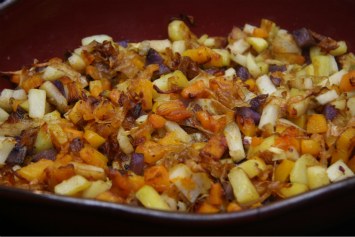 Peel your butternut squash before cutting it. The skin is very difficult to cut through especially if your knife isn’t extremely sharp.

I used mixed potatoes (Yukon, new and blue), which made the dish colorful.

I think I could have added small pieces of diced apple before the final roasting. The flavor was delicious without it, but apple does go well with the sweetness of caramelized onions and this time of year would make a nice addition.

The caramelized onions can me made ahead of time. I made mine two days ahead and put them in the refrigerator.

**How to make caramelized onions:

Peel and slice regular yellow onions. (When I made this, I used 2 onions). Add a good amount of oil to a large pan and add onions. Slowly heat oil and onions together on low heat stirring often, but not constantly.

After about 30 minutes, the onions will soften, release their sugars, and get darker. Make sure the heat is low and watch the onions so they do not get too hot.

After cooking, drain on a paper towel.