A Process For Better Emergency Rooms 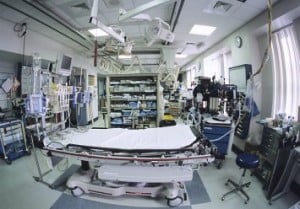 When Hurricane Irene bore down upon the East Coast this past August, many business owners were worried about how flooding and high winds might affect their operations. The entrepreneurs at LiveProcess were worried, too, and not just because their business is located right on the Peckman River at the north end of Grove Avenue: LiveProcess’ business is getting hospital emergency rooms through emergencies.

“The hurricane was a big one for us,” says Paul Ruderman, vice president of operations and emergency management. “We’re in 75 hospitals on the East Coast and 50 used LiveProcess during the hurricane. Our platform worked.”

LiveProcess has created a Web-based system that helps hospitals manage when a disaster sends large numbers of people into their emergency rooms. It connects first responders and emergency management personnel to a hospital, and helps the hospital to identify and alert the staffers that it needs to have on hand to handle an emergency. “Hospitals need to be more efficient,” says Ruderman. “Instead of an all-hands call, they need the right person at the right time.”

The past decade has been the right time for LiveProcess. The company was founded in Chatham in 2004 and and moved into the old industrial complex at Grove and Ozone three years later. With clients now in 28 states, LiveProcess has 30 employees in jobs from computer programming to sales, most of whom are based in Verona.

Hospitals are required by law to train for disasters, but the government budgets that are supposed to fund this training don’t always come through. So the biggest job for LiveProcess’ staff has often been to convince hospitals to fund the system from their own operating budget and not wait for government dollars.  Events like Hurricane Irene can make for easy sales tools. “If they had questions before the hurricane about why they had LiveProcess, those questions are gone,” says Ruderman of his customers. “They said, ‘we didn’t have an impact, but [LiveProcess] helped us get through the weekend’.”

The system isn’t just for problems created by Mother Nature, though. LiveProcess recently held a Webinar on the kind of event that often shows up in the hospital shows on television: A gunman on the loose in the hospital. Some 500 hospitals signed in to attend the training, designed to show them how to cope with workplace violence and continue the care of other patients. “You can’t deal with something unless you have prepared and drilled for it,” says Ruderman. This month, LiveProcess released a software upgrade that its clients had been requesting: A way to add more information about the qualifications of their staff and other emergency personnel into the system so that they can quickly identify and contact the best person to work on any situation that arises. When multiple hospitals in a region are on the LiveProcess platform, they can share information about the specialists they have at their disposal.

LiveProcess’ goal now is two-fold: Extend its reach beyond the emergency room into a hospital’s other operations, and to add more hospitals in every region it now serves. “I hope disasters never happen,” says Ruderman. “But they will, so we need to help people help others.”