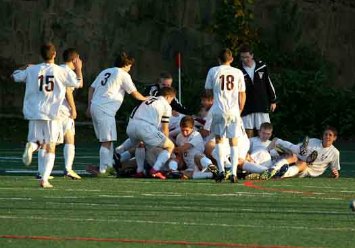 Twelve months ago, Verona boys soccer Coach Wayne Looney organized his team for the short road trip to Millburn High School, where they watched the championship game of the Essex County Tournament (ECT).

On Wednesday night, Looney and the Hillbillies will make the trip to Millburn once again, only this time the boys are going to be in uniform and they will be heading into a semifinal-round game in the ECT with Livingston High School. UPDATE: Last night’s game was rained out. The boys play tonight at  7 p.m. at Millburn High School.

The undefeated Hillbillies (13-0 and seeded No. 11 in the ECT) won the right to move on in the tournament with a hard-fought 1-0 defeat of Newark Academy in the quarterfinal round on Monday afternoon at Centennial Field. (Newark Academy was seeded No. 11 and had knocked off Montclair in the previous round.) The only goal of the game came midway in the second half when a Newark Academy defender deflected Torsten Kolind’s corner kick into the net.

The semifinal is a long way from a championship game, but winning a spot among the county’s final four is symbolic of how far Verona boys soccer has come in 2011.

The story of the game on Monday afternoon for Verona was the defense, particularly junior goalkeeper Mike King who made more than a couple outstanding saves in the contest. And he got strong support from the five-defender lineup that Verona opened the game with (seniors Tim Kiernan, Patrick Malanga and Nick Looney, and juniors Alec Puerari and Ryan Lavery). After switching to a more traditional flat-back four defense in the second half, the Verona offense opened up the field and started to exert more influence on the flow of the game. Indeed, the Kolind corner kick that led to the only goal was part of a quick series of corner kicks that the Hillbillies worked to get in the second half.

Livingston is seeded No. 6 in the tournament and upset West Orange on Saturday afternoon.

In other sports, Verona volleyball continued their winning ways with a 25-17, 25-22 victory in Newark yesterday at University High School. The Hillbillies had 11 aces on the day with senior Molly Cummings leading the team with six. Sarah Frawley had eight digs and Emily Symons led the squad with six assists. Junior Amanda Langan had four kills. The victory is the Maroon and Whites second in a row. The JV team also won their match.

The girls tennis team topped the Nutley Raiders 4-1 moving their record to 9-6. Junior Jackie Noyes took her first singles match 7-5, 6-2 over Nalali Hut. In second singles, senior Ashley Stockwell took home a 6-2, 6-1 win over Natalie Sooksatan, and Ciarra Davison won her match against Nikki Wong 6-2, 6-1. The doubles team of Caroline Chivily/Briana Tedesco scored a 6-2, 6-2 win for the Hillbillies. Verona takes on the Chiefs of Caldwell at VHS tomorrow, Wednesday October 19.

Previous articleBusinesses Spread The Word About Idling
Next articlePreserve It! Thai Dipping Sauce