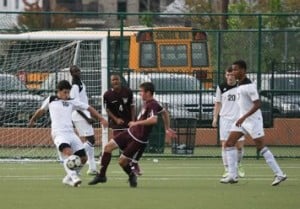 The Hillbillies (11-0 and seeded No. 11 in the Essex County Tournament bracket) rallied from an early 1-0 deficit to score two unanswered goals and defeat No. 6 Newark East Side in a first-round ECT game on Monday afternoon at the Ironbound Recreation Complex.

Seniors Dwight Tucci and Torsten Kolind scored a goal apiece and junior goalkeeper Mike King made four saves to keep Verona undefeated for the season. Verona advanced to the ECT quarterfinal round, where the Hillbillies will meet No. 13 seed Newark Academy, an upset winner over Montclair High on Sunday. The quarterfinal game is expected to be played at Centennial Field later this week.

After East Side (4-7-1) took a 1-0 lead about 15 minutes into the match, midfielder Kolind knotted the score with a direct kick from about 25 yards that floated just over the hands of the East Side goalkeeper. The two sides jockeyed back and forth through the remainder of the first half, but neither team could convert its opportunities.

Then, just a few minutes into the second half, Kolind sent a corner kick into the box, where a leaping Tucci volleyed the ball into the net for the go-ahead goal. The Hillbillies defense — led by seniors Tim Kiernan, Patrick Malanga, Nick Looney and junior Alec Puerari — held off the East Side attack for the final 25 minutes of the contest, preserving the victory and Verona’s perfect record in the 2011 season.

Verona girls’ soccer team suffered a tough defeat in the Essex County Tournament at the hands of the Millburn Millers 2-1 on Monday in Millburn. The score was knotted at zero until just minutes left in the first half when Millburn’s Taylor Perretti put them up 1-0. A second half goal for the Millers put the Hillbillies behind 2-0 but that lead was cut in half when freshman Claire Fitzpatrick scored for Verona. The Hillbillies tried to battle back and tie it up right untill the end but came up just short. Their record stands at 5-5.

After dominating the Bloomfield Tech Spartans in game one of Monday’s volleyball match 25-15 in Verona, the Hillbillies let the next two games slip away dropping them by scores of 25-23 and 25-19. Senior Molly Cummings played tough all afternoon leading the way for the Hillbillies with five kills, three assists and 12 digs. Casie Milmoe had six kills and eight digs and Emily Symons added 17 assists. The Maroon and White dropped to .500 on the season with seven wins against seven defeats.