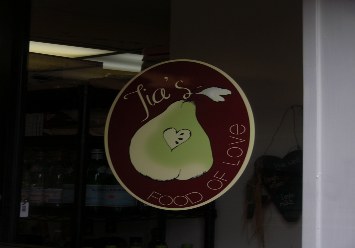 This past July, Tia’s Food of Love quietly moved into the former Verona Upholstery shop at 638 Bloomfield Avenue. With a full, custom designed kitchen in the back, it was the perfect space for Tia D’Addario to expand her business.

The new space for Tia’s Food of Love  is about three times the size of what she had in her previous space on Valley Road in Upper Montclair. With that larger space comes both challenges and opportunities. Being the chef, owner and manager of a business is time consuming, but D’Addario does have plans for her new-found space. In the front, she has been creating a very warm, inviting consultation space. When I was there I saw fabric books, design magazines, and inspirational quotes on every wall. Clients who come in will be welcomed with large comfy chairs, like the one I sat in, fresh coffee and a creative environment for planning. In the near future, D’Addario will also offer tastings for prospective clients.

While new to Verona, D’Addario is not new to either food or catering. Having always had a passion for it, she started at the age of four by simply cutting vegetables for her aunt and uncle. They would boil the vegetables, and as far as young Tia knew, she was making soup.  A few years later, around the age of 10, D’Addario began cooking recipes from Gourmet magazine. This love of food, and cooking, led to her to working at a local restaurant owned by the Mastriano family from the age of 15 to 21. She worked in the kitchen and was given freedom to create. As her culinary skills matured and transformed, she created signature dishes about which the customers raved. The only problem: Who would want to know that a 15 year old had made their food? In the beginning, D’Addario’s recipes were kept secret among the staff, but as she continued to build her menu and repertoire, the customers quickly became aware of who was behind the food.

For D’Addario, this worked out well. Eventually her aunt and uncle retired and sold their business. She moved on, but had a strong following. Having learned at a young age that if she wanted nice things, she would have to work hard to earn them, she went to hotel and restaurant management school. With that training and a continued passion to cook, D’Addario learned that her preferences, and strengths, lain in the prepared food world rather than the restaurant world. As I learned in our interview, there are very different ways to prepare food depending on how much time passes before it’s served and eaten. Enough so that there are items she does not have on her menu because they do not hold up well and D’Addario refuses to serve anything that is less than perfect.

What keeps D’Addario motivated? She loves trying new foods, new cooking styles, and being challenged in the kitchen. While her specialties lie in Italian cooking (D’Addario is a member of the Celentano family) she loves preparing Indian and Middle Eastern foods and feels inspired when preparing for events such as Oktoberfest and Rosh Hashanah. How does she make it authentic? Aside from much practice, D’Addario told me that “when you really cook from your heart the flavor is going to be as authentic as if your Jewish grandmother made it”. She feels that everything she makes has to be as good as her Italian specialties.

How did she come up with the name for her business? It starts with children. Children have food memories such as a favorite meal, holiday meals and cooking (or not) with other family members. Food is love and cooking, sharing, and eating food together is how D’Addario’s family showed love to one another both within the family and outside of the family. As a group they would spend time cooking together for others and preparing food passionately from their souls. D’Addario has seen that food brings people together and to this day, she remembers the comfort of cooking together and being together. Through food, she hopes to make people feel love as if they are her own friends or family.