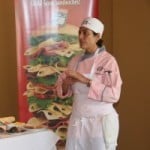 Sure, there are lots of ideas on how to cook for the big game. Most don’t leave you any time to actually see the game. But Ariane Duarte, co-owner and chef at CulinAriane  has a solution, a one-word solution: cheese.

Last week, the Verona-based chef hosted a luncheon at her restaurant that showcased some easy ways to please football’s hungry fans. In her latest venture since competing on “Top Chef”, Duarte has partnered with Finlandia, a cheese maker based in, you guessed it, Finland. Duarte took some of Finlandia’s products and transformed them in to recipes worthy of being called CulinAriane menu items. But easy enough for the rest of us to copy and enjoy at home.

Case in point: The cheese crisps made from Finlandia’s Lacey Swiss. Maybe you have tried to make some of those Parmesan frico that Mario Batali and Lidia Bastianich favor. You have to grate all the Parmesan cheese, arrange it in mounds on a baking sheet and then carefully lift them off when baked so that they shape into a cracker. But when Duarte was tasting and testing Finlandia’s products, she discovered that the Lacey Swiss bakes quite nicely into a crisp straight from the deli counter slicer. She topped them with some oven-roasted plum tomatoes–easy to make ahead–and the result is so good that you might not care which team is taking the field.

The same can be said of her turkey burger sliders. She took ground turkey (on sale starting today at Whole Foods’  West Orange store), popped it with jalapeno peppers and cilantro, and turned it into a two-bite marvel. And though Duarte travels in some pretty lofty circles these days, she never forgets her Jersey budget roots. When asked where she got the slider buns, she shrugs her shoulders and says “Pathmark”, as if the answer should have been obvious.

Speaking of budget, Finlandia cheeses, which are available in all the supermarkets around here except Whole Foods, do cost a bit more than their megamart counterparts. But a taste-testing at CulinAriane showed, pretty conclusively, that one slice of Finlandia will do more for your taste buds than a half inch of ordinary cheese, so you’ll be able to do more with less. (You can also sign up for coupons.) The cheeses are naturally lactose free, which also solves a lot of cooking headaches.

Duarte is going to be doing more with Finlandia in coming months: They are planning to do a demo for kids in Newark’s public schools soon to show easy ways to make healthful school lunches. You can make yours right now with some of the recipes Duarte created: