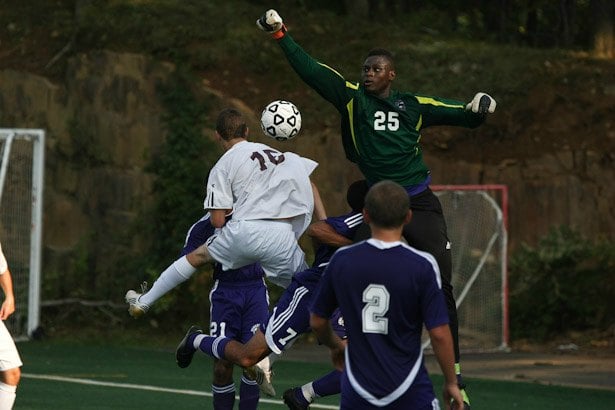 On Monday, the volleyball team pulled out a big win in Essex County Tournament action against rival Mount Saint Dominic Academy on Monday, two matches to one. Just days after the Hillbillies dropped a regular season contest to “The Mount”, they fell behind early and lost game one 25-21. Verona evened the match taking the second set 25-17 setting up for what would be a final game that will have fans talking for weeks. In front of a packed house and losing 23-17, tournament elimination was lurking. That’s when last week’s Senior Athlete of the Week Sarah Frawley stepped to the service line. With hopes of a comeback slim, Frawley used a series of powerful overhead serves that St. Doms struggled to handle. Frawley was able to hold her serve for the rest of the way as seniors Molly Cummings, Jenna Atmeh and Victoria Purcell were able to dig out MKA shot returns to pull out a thrilling 25-23 victory. Emily Symons led the Hillbillies with 15 aces and junior Amanda Langan had three aces and four kills in one of the biggest victories this program has seen.

Verona struck for three goals in rapid succession about midway into the first half. The scoring spree began when sophomore Matt Braschi headed Nick Looney’s throw-in across the front of the net to a waiting Jonathan Tosh at the left post. Moments later, Tosh hit a well-placed cross from the left side of the field to sophomore Troy Carrington, who knocked in Verona’s second goal with an acrobatic volley. Braschi added another goal in the first half on a hard shot from 15 yards out, and Carrington–who just returned to the lineup last week after an injury–showed his lightning speed on a breakaway goal early in the second half to give Verona its winning 4-0 margin.

The central defense – led by junior Alec Puerari and seniors Patrick Malanga and Tim Kiernan – played superbly, shutting down a Newark Tech team that had been averaging four goals per game. Puerari drew the assignment of marking Tech’s high-scoring Pablo Valle, holding him virtually without a shot, and Malanga and Kiernan provided double-team support and cleared numerous balls from the Verona side of the field.

Verona now awaits details on the Essex County Tournament and the first-round pairings. The Hillbillies were seeded 16 in 2010, and defeated No. 17 Cedar Grove in a preliminary-round game before falling to No. 1 Seton Hall Prep.

Verona girls’ soccer team suffered a tough road loss at the hands of Montclair Kimberley Academy, 1-0. Despite Verona’s tight defense and Alison Sprong’s effort in goal, MKA’s Claudia Sheer was able to take a second half pass from Erin Duca to put the Cougars ahead for good. Verona is 4-2 on the season and plays a home match this Wednesday against Nutley at Centennial Field.

The girls tennis team dropped their second in a row, falling to West Orange High School four matches to one. Verona junior Jackie Noyes continued her win streak by topping Lindsey Tortora 7-5, 6-4 in first doubles. Sophomore Ciarra Davison took the first game from Sruti Kantan 6-2 but was unable to hold on dropping the next two games 6-2, 6-0. In one of the afternoons more exciting matches, Jasmine Okafor and Allie Vaccaro fell just short of winning their doubles battle 6-2, 2-6, 7-6. The tennis teams’ record stands at 4-3.