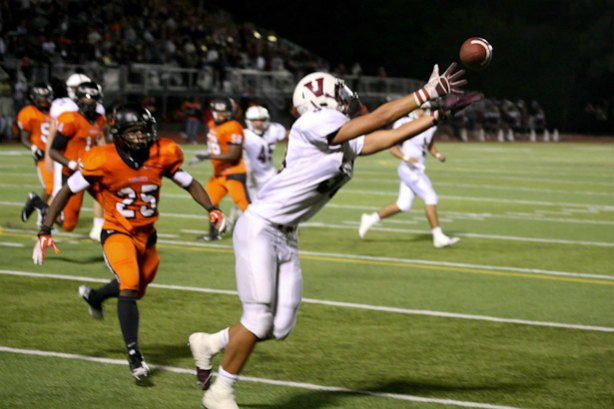 The Tornadoes of Orange High School topped the Hillbillies 14-12 in front of a packed Bell Stadium on Friday night. Both squads were holding each other in check throughout the scoreless first quarter until Orange struck early in the second period. That’s when Jamar Summers took a 22-yard pass into the end zone to jump ahead 6-0. The point-after kick was successful and put the Hillbillies down 7-0. 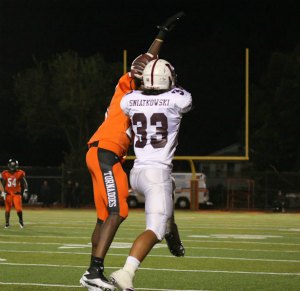 Verona came storming back when Dean DeNicola hit Billy Meade and Luke Sniatkowski on a series of passes that brought them down to the Orange four yard line. DeNicola, working out of the shotgun, took the snap and rolled left looking for an open receiver. With nobody open, the junior QB ran untouched into the end zone to pull within one. But Verona’s extra point attempt was unsuccessful. After a hard fought first half, the teams went into the locker room with Orange up 7-6.

Time seemed to tick away quickly in the third quarter with both teams once again holding each other scoreless. At the beginning of the fourth, Amid Clark broke away from the grasp of Hillbilly defenders and raced 45 yards down field to put Orange up 13-6, Marquiso Jean’s extra point attempt split the upright for a 14-6 lead. On the ensuing kickoff, Meade broke away and ran the ball back 60 yards putting the ‘Billies down around the 20 yard line. After a first down and the ball on the 10 yard line, Verona made four unsuccessful attempts to score and turned the ball over on downs. Minutes later, after hitting Sniatkowski on a 25-yard strike, DeNicola saw Alex Dellavalle open in the end zone for a 25-yard touchdown to make the score 14-12. Verona’s two-point attempt to tie the score came up empty.

With under a minute left and no timeouts, the Hillbillies made a gallant effort to pull out a win. DeNicola at the helm strategically used his receiving corps to march down the field within striking distance. However, with the clock against them, the ‘Billies just came up a little short. For the second year in a row fans of the Maroon and White left Bell Stadium disappointed but were treated to an excellent hard-fought game by their Hillbilly squad. Sophomore Matt McKeown had two interceptions from his linebacker slot on defense.

Next up for VHS is a 1 p.m. home game on Saturday, September 24, against the MKA Cougars.