Hillbilly Heartbreaks, And A Win 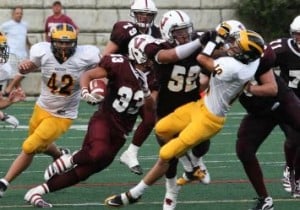 On Saturday afternoon, the Hillbilly footballers suffered a tough loss on a controversial game-ending call that sent a crowd of about 2,000 leaving in disbelief. With 6 seconds on the clock and the Panthers looking to win the game on 20-yard field goal, senior Billy Meade blocked the kick attempt. As most of the Hillbillies stormed off the field in celebration, Cedar Grove lineman Vin Cordasco picked the ball up, attempting to make his way to the goal line. The remaining Hillbillies fought valiantly to keep him out, leading to the stinging call. It seemed as though Cordasco was pushed by his teammates to the goal line in a clear violation of the rules. After a brief discussion, Cedar Grove was declared the winner, sending Verona fans away shaking their heads and bringing back memories of last spring’s controversial baseball match.

The game had been a classic Verona-Cedar Grove rivalry. Verona jumped ahead in the first quarter when junior running back Frank Greco raced 14 yards for Verona’s first score. The Panthers answered back with two TDs before Greco intercepted Cedar Grove quarterback Joe Slattery’s pass attempt and raced 31 yards for the score.

The final quarter began with the Maroon and White down by 8 points. However, the boys pulled one out of the hat when junior quarterback Dean DeNicola passed the ball to tight end Luke Sniatkowski, who in turn threw a 24-yard touchdown strike to Meade. On the extra point Greco pulled up and hit Sniatkowski with a 5-yard pass, tying the game. Once again the Panthers jumped ahead but Verona struck back when DeNicola hit Sniatkowski on a 58-yard pass, bringing the ball to the Cedar Grove 7 yard line. Then DeNicola hit Alex Dellavalle for the TD tying the game. Greco rushed for another TD putting Verona ahead by 2 with 40 seconds left. A long Panther kick return coupled with timely pass completions set them up for the game’s final play.

Fred Goode photographed the game and the honor guard ceremony marking the residents of Verona and Cedar Grove who lost their lives in the 9/11 terrorist attacks.