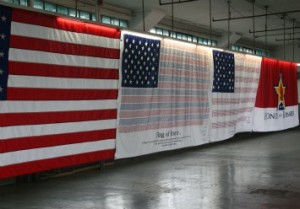 There will likely be many flags flying on September 11, 2011, the tenth anniversary of the 9/11 terrorist attacks on America. Some will be flying in Verona, but many more will have a direct connection to our town, since we are home to America’s oldest flag maker.

Four iconic flags were unveiled yesterday at Annin Flagmakers, two of which were a stark reminder of how much our nation lost a decade ago. The Flag of Honor bears the names of the people who died at the World Trade Center and the Pentagon, as well as on the four planes overtaken: United Airlines Flights 175 and 93 and American Airlines Flights 11 and 77. A companion banner, the Flag of Heroes, is printed with the names of the firemen, police and rescue workers who were killed. Both are the work of the Flag of Honor/Flag of Heroes Project, which supports 9/11-related charities. Annin’s manufacturing loft also displayed the Honor and Remember Flag, the work of a father who lost his son in Fallujah, Iraq, and the National 911 Flag, which had been at Annin for repairs in early February.

The sheer number of names on the Honor and Hero flags–2,976–is overwhelming enough. “When they died, a piece of America died,” says John Michelotti, who created the project. “Even  if these flags are put away, 100 years from now people will still see the names and remember.”

But three names on them are a fresh reminder of what the attacks cost right here. William Erwin and Stephen Roach were Verona residents who died in the attacks; Howard Kestenbaum was a resident of Montclair who worshipped at Congregation Beth Ahm. (You can search for any name on the flags here.) In three weeks, Annin will be overseeing the installation of 3,000 Honor and Hero flags in Battery Park, flags that will on display from September 8 to 12. There will also be a flag for each country that lost people in the attacks. In addition, Annin will be providing 57 flags to Essex County’s 9/11 ceremony at Eagle Rock Reservation to honor all 57 county residents who lost their lives in the attacks. Annin has produced a video about the installation, which you can view here. (We are not presenting it here because there are some images that may still be troubling.)

Verona’s ceremony to mark the 10th anniversary of 9/11 will be on Sunday, September 11 at 6 p.m. at the memorial in the center of town. Town Council member Jay Sniatkowski noted at Monday’s Council meeting that the appeal to replenish the Sept. 11 Fund scholarship has so far brought in $3,800. “We appreciate everyone who has made a donation,” he said. If you would like to donate, send a check made out to the Sept. 11 Fund to Verona town hall, 600 Bloomfield Avenue.