Day Trip: The Museum Of The Moving Image 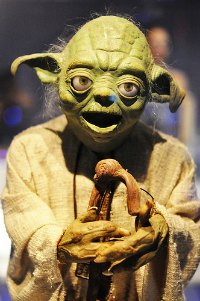 By now, your kids have probably seen all of the blockbusters: Harry Potter, Smurfs, Transformers, Captain America, Planet of the Apes. So It may be a good time to take them to see how those movies were made.

The New York City borough of Queens is home to the Museum of the Moving Image. Here, the kids can try their hand at stop-motion animation, creating a photographic flip book, dubbing dialogue in The Wizard of Oz or Babe and even adding a new sound track to a Hollywood classic. The museum has a permanent collection on the history and technology of movies and television, which sort of picks up where the Edison Museum in West Orange leaves off. They can see one of the Yoda puppets used in Star Wars while you can take in the puppet used to make you believe that Linda Blair’s head really did a 360 in The Exorcist. Chances are the kids will not believe that movie cameras were ever as large as the ones in MOMI’s rooms.

The museum also has a changing array of special exhibits. It currently features a retrospective on Jim Henson that covers not only the Muppets and Fraggle Rock, but his early work on commercials, which the kids found hilarious. “When we don’t know how to end a spot, we just blow things up,” Henson said in an early interview, an approach that more of today’s marketers might want to take to heart. The show, which runs through January 16, 2012, includes such gems as Miss Piggy in her wedding dress, the original Cookie Monster and Bert and Ernie before they became controversial.

The price of admission to MOMI is pretty reasonable by New York museum standards: Just $10 for adults and $5 for kids. It’s located in Astoria, Queens, next door to the Kaufman Astoria Studios, where parts of the Smurfs movie were shot, and not far from Silvercup Studios, which has been home to “30 Rock” and “The Sopranos”. (Neither offers tours, but they are fun to point out on the drive in). And if you time your visit right you might get lucky (as we were) and find free street parking, something that is pretty much unheard of in Manhattan.

All of which is good because MOMI is not an easy museum to get to. You’ve got to go through Manhattan, across the Queensborough 59th Street bridge and into the mind-boggling street grid of Astoria, where you can have 35th Street crossing 35th Avenue. You can also take the M or R subway from Manhattan to Steinway Street.

We spent more than four hours there recently and at the end of it my resident film and travel critics had just one question: When can we go again?