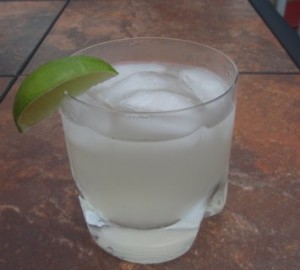 I received this recipe from Meryl Connelly of Tortilla Sunrise. When we spoke, it quickly became clear that we are both big fans of cinnamon. I told her my challenge was finding recipes involving the whole cinnamon stick. We talked about a couple of options and I also told her I was looking for something that could be replicated at home. I’m going to say here: Thank you Meryl. Once again, I have received a gift involving cinnamon.

After we spoke, Connelly did some brainstorming and wrote me: “Since it is so hot out and this drink is becoming quite trendy,  I thought I would send a recipe for Horchata. It is a very common, refreshing drink often  served  by street vendors in Mexico and Spain. There is a group of drinks called agua frescas, which means water refreshment. They are basically water, sugar and either fruits, cereals, grains or nuts, blended together strained and served cold. Horchata is an agua fresca made of rice and or almonds, ( I use both)  water, sugar, lime, and…wait for it………….cinnamon stick.”  What I found for the history of Horchata was this: Horchata (or-CHA-tah) is a milky white, sweet beverage which originated in Egypt. The drink was then introduced to Spain and from there Mexico. The original Spanish version was made with ground tiger nuts but in Latin America, the tiger nut is not readily available so pulverized rice is often used. In the online recipes I found, some also include milk which definitely creates a milkier looking drink. I think I like this version better.

I have to admit, I was both excited and skeptical when I read through Connelly’s recipe. The last time I had agua fresca (often referred to as just plain “fresca”) was when I was living in Cost Rica about 20 years ago. The main meal of the day is served at lunchtime and every day we had some kind of “fresca” to drink. I was excited to have the opportunity to make my own yet skeptical because the thought of soaking rice overnight and then blending it to make a drink seemed a little strange. Now that I have made this, let me just say that this is a very refreshing drink for summer with a lot of potential. I have tried it straight over ice, with a cinnamon-sugar rimmed glass, and as a cocktail with rum. It’s definitely what I call “company worthy”  and whether you are feeling skeptical or adventurous, I would encourage you to try this while the summer days are still warm.

a few limes for squeezing and garnish

For a delicious adult beverage (now a very popular bar drink) add a shot of rum and garnish with lime wedge.

This is actually very easy to make especially since the overnight soaking does most of the work.

I would definitely suggest using cheesecloth and make sure you have enough available as each run through requires new pieces.

I used the cinnamon from my mother in law which is very fine and easy to break into pieces. Connelly uses full sticks from McCormick and they both break and blend well. So, either kind would work for this recipe.

Finally, I had a great time with this recipe and think it leaves some room for creativity in the kitchen. I would be willing to try it again with orange zest and squeezing a little fresh orange juice into the glass. Orange and cinnamon are so good together that I don’t think you can go wrong.