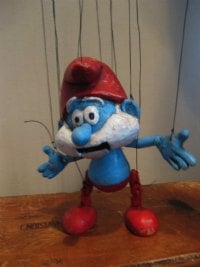 Turns out, Chris Place isn’t the only Veronan with a hand in the new Smurfs movie. One of the first shots in the film are of two Smurf marionettes, built by James Wojtal Jr.

Wojtal, who has built puppets for Sesame Street and Avenue Q and worked the puppets in ImaginOcean, was contacted by the props designer for the “Smurfs ” movie in January 2010 and contracted to design four puppets: two of Papa Smurf and two of Smurfette. He notes that he had “invaluable help”in their creation from fellow puppet designer Deborah Glassberg.

The marionettes are featured at the top of the movie and they make a small cameo in the end of the movie in the credits. Wojtal did some of the puppeteering, along with Michael Leach and Jamie Elizabeth Moore, both of the Puppetworks Theatre in Park Slope, Brooklyn. Wojtal used to work at Puppetworks, which is a great venue for inexpensive marionette shows for kids. 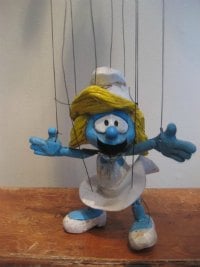 Wojtal says that the Smurf marionettes are all about 7.5″ inches tall and they have moving mouths. He sculpted them in clay, then molded them in silicone rubber and cast them in plastic. “I made two of each character and lots of spare hands and legs,” says Wojtal, “and a soft pair made from a flexible urethane rubber material so that Gargamel could slam them around with out breaking them.” Speaking of Gargamel, Wojtal and his fellow puppeteers got to give the actor some quick puppeteering lessons. “In the close up shots we are puppeteering”, he says. “In the wide shots, it’s Hank. It was a fantastic experience over all.”

By the way, if you want to experience Wojtal’s puppeteering in ImaginOcean, you only have until September 4. The show closes its Off Broadway run then and heads out on national tour.