Verona And The Smurfs 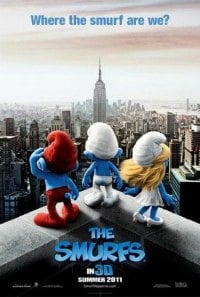 This one is for Lynn Serra, Susan Fenker and all the rest of you Smurfs fans here. When you go to the movie this weekend, try to spot the fellow Veronan in the film. Hint: It’s not one of the pudgy-cheeked blue guys.

In “The Smurfs”, actor Hank Azaria plays the evil wizard Gargamel and, on screen, he appears to get kicked around a lot by the animated characters. Except that it’s not Azaria being beaten up: It’s Chris Place, a stunt double who just happens to call Verona home.

As we noted when we wrote about Place last year, he typically takes a lot of abuse during movie shoots. (He was also the psychopathic killer in Wes Craven’s “My Soul To Take“.) But all the flack that he has taken in the past is apparently nothing compared to the power of a Smurf on a mission. During the filming last year, Place says, “I bruised a kidney and had many lumps on my bald head from constantly falling flat on my back for the movie. The Smurfs were always kicking my butt.”

In the video clip below, you can Gargamel colliding with a New York City bus. That was actually Place, stuck to the front of a bus riding down Fifth Avenue. He also had to dive into a pile of trash bags from 25 feet up, one of several “wire flying” stunts (as they are known in the trade) that were part of the movie. “I spent a lot of time in a harness though flying through portals and such,” he says, “and always flying into objects of course.”  Because Gargamel is bald, Place also had to be shaved bald every day–part of the two hours of makeup that he went through every morning before filming.

There were some perks, however. Says Place: “I ventured into Barnes & Noble once in the full Gargamel outfit and got the strangest looks from everyone!”

Place did not make it to the New York City premiere of “The Smurfs” because he was at work elsewhere, doubling an actor in the new Adam Sandler movie “I Hate You Dad”. He spent the month of June in New Orleans, doubling Channing Tatum in the “21 Jump Street” movie that is being spun out of the Fox crime series .

All in all, it sounds as if Place has earned himself a trip to Towne Scoop this weekend: They’re making Smurf ice cream cakes, and you can see one on our home page.

UPDATE:  Place isn’t the only Veronan with a hand in the movie. See this story on James Wojtal Jr.