If you are at Verona Pool today and there’s a loud horn followed by a flashing light, get out of the water immediately: Verona’s new lightning warning system is sensing trouble nearby.

Late last week, Verona installed a saucer-shaped antenna on the roof of the main pool building designed to sense a lightning strike well before it can be spotted from the lifeguard’s chair. Made by a company called Thor Guard, it senses changes in the electrostatic properties of the atmosphere that can predict a lightning strike. A similar antenna has also been installed on the roof of the Verona Community Center, to watch for lightning strikes at the current and future recreation fields on the western side of town. The system has been set to offer about 8 to 20 minutes of advance warning of lightning.

“I’m thrilled with it,” says Recreation Director Jim Cunningham of the Thor Guard system. “This has been on the wish list since I got here, but the idea has been in the community for years.”

Cunningham knows all too well the dangers of lightning strikes. When he was working in the West Orange recreation system a decade ago, lightning struck and killed a baseball player during a high school game. It was a cloudy day, but not one that seemed ripe for a lightning strike to a casual observer. 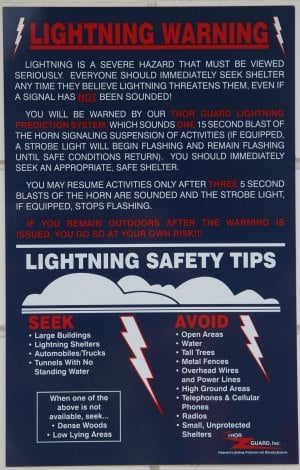 Thor Guard takes the decision making out of human hands. For most of the early years of the Verona Pool, we relied on human observation of lightning to whistle swimmers out of the pool, sometimes with close calls. More recently, Verona tracked weather radar over the computer. The Thor Guard system, which is in place at several area golf courses, including the Montclair Golf Club, Essex Fells Country Club and Crestmont County Club, uses technology to sense changes in the local atmosphere that can predict lightning strikes well before lightning is visible or thunder is heard.

If the Thor Guard system sees reason to predict a strike, a horn will sound and the location’s strobe light will begin to flash. When the danger of lightning has passed, there will be three horn blasts and the strobe lights will go off, which means we may be back in the water or on the field sooner. Currently, the Verona Pool mandates 20 minutes out of the water after every clap of thunder.

According to Cunningham, the system cost about $20,000. If it works well at the first two locations, it may be extended to other locations, such as Everett Field or the public schools. Posters at the pool describe the system and what the public needs to do if lightning is predicted, and that’s not just getting out of the water. You’ve got to clear the cement deck and grass that surrounds the pool, and taking refuge in the gazebo is not an option. Cunningham wants you all the way inside the main pool building or, better yet, in your car with the windows rolled.

Says Cunningham: “We have another tool to enforce with the public that lightning is a danger and we should not take it lightly.”