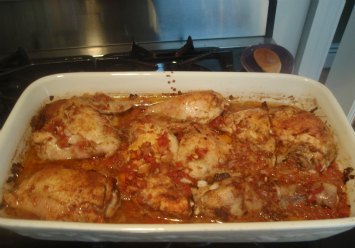 This recipe is from the executive chef of Union Square Cafe, Carmen Quagliata.  He also happens to be a Verona dad who cooks for his family.

Previous recipes that Quagliata has shared with MyVeronaNJ.om (Barcaiola sauce, garganelli pasta) showed off the cooking that he is best known for: his use of fresh ingredients in his southern Italian style of cooking. This recipe may not be on the menu at Union Square Cafe, but I’ve learned something from working with him while putting this series together.

First, like any other parent who cooks for a family, it’s fun to make recipes that are different from the usual. Second, I am not the only one who “wings it” when cooking. The measurements I received for the ingredients were his estimates and the instructions simple, made for someone who knew what they were doing in the kitchen. For me, and I suppose other professional and home chefs, there are recipes and foods we make that are similar to the way we drive. Sometimes you just know the roads to go on, but not their names.

So I’ve taken this meal that Quagliata makes for his family and streamlined it for easy following. Thank you Carmen for sharing this recipe with me and now with other Verona parents. It’s delicious and I’ve already made it twice. I’m even thinking it would do well in my slow cooker, but we’ll all have to wait a bit to see how that goes.

For the spice rub:

salt and pepper to taste

Into the baking dish add plum tomatoes, orange juice, bell pepper, onion, garlic, salt, pepper. Mix everything together with your hands. Yes, this is really the best way to do this–trust me.

Place in oven and bake until it is all “glazey and tender” about an hour.

Sprinkle the top with cilantro leaves and serve.

Quagliata says, “The cinnamon is really great in this.”

The first time I made this I used a whole cut up chicken just because that was what was in my freezer. The second time was a combination of thighs and drumsticks.

The flavor was delicious and the spices, tomatoes and pepper made a flavorful sauce to pour over the chicken and mix with the rice.

I did not sprinkle with cilantro leaves–they’re green and then my kids wouldn’t have eaten dinner! Crazy, I know.

I made the spice rub ahead of time and used it on grilled steaks. Delicious!