What VHS 2011 Is Doing: Career Training 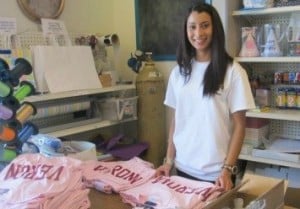 If you are one of those people who shies away going to the dentist, you should be pleased to hear what Amanda Reyes is doing after graduating from Verona High School this June.

Reyes, a very personable young woman with a smile that could put anyone at ease, is going to school to be a dental assistant. Before the rest of the Class of 2011 starts their second year at college, Reyes will be employed in her field and working on training that will boost her earning power. “I think I can make people not hate the dentist,” she says.

Last summer, after the Class of 2010 graduated, MyVeronaNJ.com wrote about what was ahead for several members of that class. We profiled a student headed to nursing school, a group going to hospitality school, and two young women who wanted international educations, one in the U.S. and one abroad. This year, we are looking at students on career tracks and in colleges that involve art, music, business and more. Bookmark the tag “Class of 2011” to read them all.

Verona’s graduating classes have always held a mix of college- and career-minded students and this year is no different. Nine members of the Class of 2011 left VHS to go directly into the workforce, or into specialized career training. Nicholas Berra will be attending the Universal Technical Institute, an automotive and mechanical training school, and Nikolette Robertella will be going to the Artistic Academy beauty training school. Reyes and her best friend Alyssa Lopomo will be attending the Fortis Institute, a school that trains dental and medical assistants that is located out by Willowbrook Mall. Another 16 will be going to community colleges like Essex County College and County College of Morris, schools that offer both career education and a platform for transferring into a four-year degree. Four others will be going into the military, which can help them develop technical skills and a work ethnic that is in demand among many employers.

In a rocky job market, these can be practical choices. It will cost Reyes just $18,000 to complete the nine-month program at Fortis and she won’t have to give up her part-time job at Terry’s Drugs to do it: Her classes at Fortis will run from 8 a.m. to 1 p.m. The U.S. government’s Bureau of Labor Statistics says that job prospects for dental assistants are “excellent”. Dentists, especially the younger ones, like to employ assistants so that they can focus on more complicated tooth care. Employment in the field is expected to grow 36% from 2008 to 2018, thanks to aging Baby Boomer teeth and the usual needs of young people. Median annual wages of dental assistants aren’t high–just $32,380 in May 2008, according to the BLS. But they can grow with additional training and certification, which Reyes intends to pursue.

Reyes moved with her family to Verona from Bayonne when she was in the seventh grade. She was on the cheering squad in her freshman year at VHS, and she’s been an avid supporter of Hillbilly football and wrestling. She began thinking about a dental arts career in her junior year after talking to the assistant at her dentist’s office, who is also a Fortis grad.

Reyes views her plans as the first step in a career that will ultimately be a blend of classroom education and on-the-job training. “There are majors in college,” she says, “but there are so many other options.”