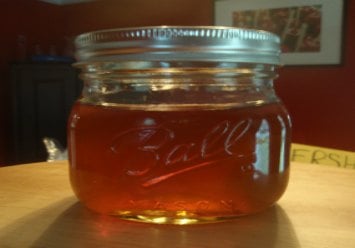 I’ve only made a simple syrup once before. I was for the purpose of mojitos (I had a lot of mint last year) but the muddling of the mint made the whole process seem tedious and not worth the result.  I was done with my need for a simple syrup, or so I thought.  As Scott Savokinas was helping me with ideas for how to use cinnamon, a cinnamon-infused simple syrup was suggested.

As usual I was winging it and thought it would be a good idea to let the water, sugar and cinnamon boil for a while to thicken. In the end the flavor was delicious, but as it cooled I ended up with cinnamon flavored candy. (Savokinas didn’t have this problem when he tried it– he knew what he was doing from the start.) Delicious, but not what I was going for. It also required reheating to soften if I wanted to use it for anything. So, I took a step back and looked up recipes for simple syrups and let me just say that in the end, what I came up with was so good I could eat it with a spoon.

2-3 cinnamon sticks or a small bundle if you have the kind I do.

Place all ingredients in a sauce pan. You can leave the cinnamon whole or put it in cheesecloth to make a spice bag. I left it whole and ran the finished product through a mesh strainer.

Bring to a simmer and cook for 5 minutes, stirring occasionally to dissolve the sugar. Remove from heat and let rest for 10 minutes.

Remove cinnamon and store liquid in a glass container with a lid. It will keep for six months.

What to do with your cinnamon syrup:

Pour over ice cream. Vanilla and chocolate work great. I tried also with coffee chip and black raspberry but the syrup didn’t add a spectacular dimension of flavor that would make it worth doing again.

Add to chocolate syrup (hot fudge sauce) and then pour over ice cream.

Add to iced coffee. YUM! In the summer when sugar doesn’t dissolve well in iced coffee, I prefer this to sugar substitutes in my iced coffee. Just be sure to stir well.

With fruit: Hollow out a small, fresh strawberry pour some syrup in the cavity. Wow – what a burst of flavor!

Chocolate Cinnamon Fondue: 12 ounces of bittersweet chocolate (chopped) and 1 cup heavy cream.  Heat the cream with 2 tablespoons of the cinnamon syrup until small bubbles appear around the outside of the pan.  Remove from heat and let sit 10 to 15 minutes.  Add the chocolate and stir. Fondue!