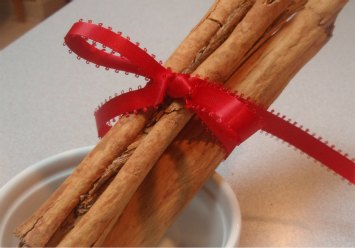 I love cinnamon. It adds a dimension of flavor to food that just makes me happy. As I learned from putting this series together, I am not alone. Cinnamon is often highlighted during the fall and winter for cakes, breads, and rolls, but I was on a mission to find a way to use it more. Why? A year or so ago, my mother in law brought me a small amount of cinnamon from Ecuador. I used it all. When she went back to Ecuador this past spring, I asked for more. I should be careful what I ask for. What I received was the amazing gift of a huge bag of cinnamon sticks bigger and more delicate than anything I’ve ever seen in this country. My challenge: what to do with it beyond cinnamon toast and applesauce. I started asking around and trying to get creative with my cinnamon. I knew there were recipes beyond toast!

I started with Scott Savokinas, of Cuisine Inspirations, who has been kind enough to share recipes with me in the past for this site. Entirely by accident, we started a creative food process that built the foundation for a summer food series focused on cinnamon rather than fresh veggies and grilling. It has been so much fun, it was absolutely worth sharing.

And so, here starts a little summer series on cinnamon. Recipes, stories, different uses and anything else that comes up. If you have a recipe, please share it. If you love cinnamon, read along and enjoy!

Cinnamon comes in three forms: stick, ground, and oil. It also comes in two different species: Cassia, which is usually spicier and what we typically see in grocery stores, and Ceylon, which is more subtle in both texture and flavor than the Cassia cinnamon. The kind I received is Ceylon, which is often referred to as “true” cinnamon because it comes from the cinnamon tree. Lucky me!

According to a December 2005 issue of Cuisine At Home, stick cinnamon has shelf life of two to four years (compared to six months for ground cinnamon). The reason for this is that the essential oils are kept intact within the cell walls of the stick.  Once it is ground, the oils are released and can begin to degrade or lose their potency.

Essential oil of cinnamon is an antiseptic, antimicrobial and thought to promote cardiovascular health, immune health, and lower blood sugar. Cinnamon also has been known to increase the appetite and some cultures even use it as an aphrodisiac. The history of cinnamon is quite lengthy and in the not too distant past, was available to only the noble and wealthy.

Adding it to ground coffee in my coffee maker before brewing. My mother used to do this long before flavored coffee was the norm.

Adding it to pancake and waffle mix. Kids don’t even notice it and the flavor is subtle.

Looking for it in any spice rub recipe I read.

Things I have learned about cinnamon:

Trying to grate the Ceylon variety I have does not work, even with a microplane grater. Messy and “barky”

Ground cinnamon seems to be so much more common as a use, it’s worth knowing what kind you are getting in that jar. I’d love to be able to find more uses for the whole sticks that I have. I wonder if I could steep it for tea????

In addition to the Ceylon cinnamon I received from my mother in law, I also have a jar of the Cassia (traditional) cinnamon sticks we have in stores. Some recipe I was reading suggested breaking the stick into halves or thirds. Nearly impossible with the Cassia, but amazingly easy with the Ceylon. So depending on the recipe, it may be better to have one type over the other for a reason other than flavor.