A New Era Begins At DiPaolo 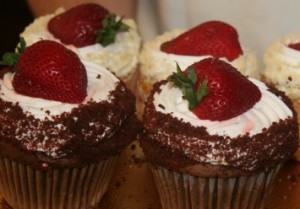 Maybe you’ve been into DiPaolo Bakery recently a noticed a new face behind the counter. Younger, taller, but still familiar. Chances are, this new person introduced himself and asked what kind of baked goods you like. Then, he probably told you about some of the new things he’s doing at one of Verona’s oldest food establishments. A lot of things, actually.

About three weeks ago, Vincenzo and Maria DiPaolo stepped down from the bakery that they have run for 31 years and quietly turned the ownership of DiPaolo Bakery over to their nephew, Fulvio DiPaolo. He is hardly a newcomer to the business, which started in Newark. “I’ve been involved in the bakery since I was 4,” he says. “I went on deliveries with my dad and uncle. I learned to mix cakes.” (That’s Fulvio in the first slide below; he’s camera shy.)

Now, he is mixing the tradition he inherited from his father and uncle with flavors and business smarts that are very 21st century. The new DiPaolo Bakery still makes the ciabatta that was a brick-oven favorite in Newark, as well as babas, sfogliatelle and old-world apple tarts . And cannoli for what Fulvio DiPaolo calls the “3 o’clock crowd”. It turns out that the kids streaming out of H.B. Whitehorne are a very discerning bunch who prefer traditional Italian sweets to brownies.

But there are also tastes like prosciutto biscuits, just right for an antipasto platter. There are new varieties of breadsticks and taralli, sugar-free cookies and birthday cakes, and 12 different varieties of stuffed bread. There are lunch options to eat in and dinner options to take home, including a wide range of individual pizzas and large Sicilian-style pies. Fulvio DiPaolo can also make gluten-free pizza on request. Cupcakes your thing? Hold on because, soon, DiPaolo Bakery is going to be featuring cupcakes with names and flavors inspired by every region of Italy.

Oh but there’s more. The new DiPaolo Bakery has a Facebook page, where Fulvio DiPaolo will be doing things like announcing that he’s going to have “Real Housewives of New Jersey” star Teresa Giudice in for a cookbook signing and cupcake tasting on Wednesday, July 27 (go ahead, you can hit the “like” button now). And the icing on the cake: DiPaolo Bakery now takes credit cards.

But don’t let that fool you for a minute into thinking that Fulvio DiPaolo is gunning for a spot on a reality show. His world is firmly grounded in the 20-hour days and seven-day weeks of an old-world baker. “I have a hand in everything that comes out of these ovens,” he says.