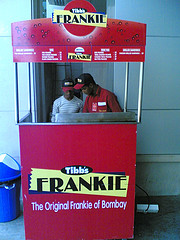 If this keeps up, we are going to have to get Floyd Cardoz a food truck in Verona.

Last Wednesday night, Cardoz found himself among the judges’ favorites on Top Chef Masters. The Week 5 challenge was all about fast food, and Cardoz dished out something called a Chicken Frankie. That sounds like something that might be on the menu at Frank Anthony’s, where all the sandwiches are named after friends and family.

So we did a little sleuthing and found out that a Chicken Frankie is the quintessential street food of Bombay and that Cardoz had a Frankie cart at Tabla, his former restaurant in Manhattan. In Bombay, there’s a Frankie chain called Tibbs, which gets the credit for inventing the dish and naming it after a cricket player. Call it what you like, it sounds delicious and Cardoz has posted the recipe on the Top Chef site here. The chef said in his Twitter feed that he loved the quinoa fritters made by Chef Mary Sue Milliken, who won last week.

Cardoz will be back behind the stove tonight at 10 p.m.

Photo of Tibbs Frankie stand by shrinath_s via Flickr.