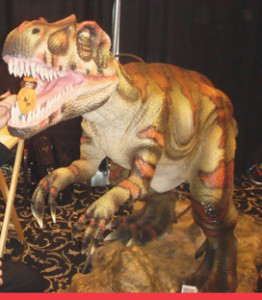 The Newark Museum will be holding its fourth annual Dinosaur Day on Sunday, May 1, from 10 a.m. to 4 p.m. Your kids will learn all about the dinosaurs that once roamed New Jersey through games, performances, a dinosaur bone exhibit, live animal presentations, fossil digs and more. (In case you didn’t know it, the world’s most complete dinosaur skeleton was unearthed in Haddonfield, N.J. in 1858–it’s the plant-eating “duckbill” dino that the kids know as Hadrosaurus.)

The museum will once again partner with Dinosaurs Rock® to create a display of pre-historic pieces including a nine-foot high Ice Age mastodon leg cast; a life-size T-Rex skull cast; mammoth tusks; an Allosaurus skull cast; a five-foot high Mosasaur skull cast; a Tarbosaur skull cast and an Apostosaurus femur. Kids can dig for shark teeth fossils, participate in a gemstone sluice, make their own stegosaurus helmets and clay model dinosaurs to bring home, and even make a diorama of the world where the dinosaurs roamed. Artist Bob Walter will help children create dinosaur drawings based on bone and tooth fossils. Kids will learn about the relationship between birds, reptiles and dinosaurs, and each one will take home a souvenir fossil.

Dinosaur Day is freewith suggested Museum admission, which is $10 for adults, and $6 for seniors, children and students with valid ID.