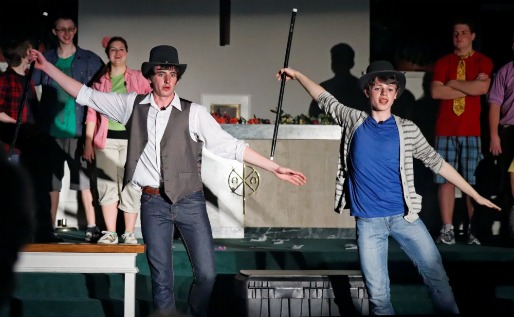 The First Presbyterian Church at Caldwell is putting on “Godspell” this weekend, and there are plenty of Veronans in the cast–and behind the scenes. Michael Hardenberg (right, above)  is Jesus, Sean McGinley (left) is Judas and Paul Salierno is in the chorus. The Piercy family put it all together, from the show’s director, Adriana Piercy, to her parents, the Rev. Barbara Jo Piercy, the church’s minister of music and show producer, and Noel Piercy, its music director.

The performances here will be Friday and Saturday, April 15 and 16, at 7:30 p.m. and Sunday, April 17 at 6 p.m. There is a suggested donation of $10 per person at the door. The Sunday night performance will include a talk by Ken Davenport, a Tony-nominated Broadway and Off-Broadway producer who is currently working on a Broadway revival of “Godspell”.

The weekend performances are the culmination of a process that began with music rehearsals last September and included a February school break performance tour at several churches in Florida. The church has previously staged “Jesus Christ Superstar”, “Joseph and the Amazing Technicolor Dreamcoat”, “Children of Eden”, and “Once On This Island”, performances that took the young people in them all over the United States, as well as to Great Britain and Canada.

Previous article
It’s Lego At Lyndhurst Weekend!
Next article
Get Out And Run With OLL