Where In Verona Is It? It’s Sonny’s On The Avenue 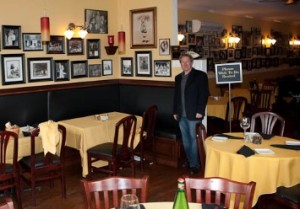 Maybe it was because it’s not summer, and you’ve forgotten what the patio behind 624 Bloomfield Avenue looks like when it’s open for music and dining. Or maybe it was because whenever you’re in Sonny’s On The Avenue, you’re staring at what’s in your plates and not what’s on the walls. Whatever the reason, it took you a while to figure out where we were for this week’s Where In Verona contest.

Yes Fred Goode did a bit of a head fake with that photo of the photo of New York Giants’ player Michael Strahan. But if he had taken a picture of almost any other spot on the walls, you would have easily spotted the face of owner Tom Malanga, son of the restaurant’s namesake, Salvatore “Sonny” Malanga. Tom is a familiar face, on the walls, in photos with his brothers and family, as well as on Bloomfield Avenue, where, as the president of the Verona Chamber of Commerce, he keeps a watchful eye over the Verona business community, particularly the newcomers.

Sonny’s is a relative newcomer to Verona itself. Opened in 2006, it occupies the high end of the Verona dining scene. Sonny’s offers the Italian classics, like incredibly light four-cheese ravioli, as well as Italian with a twist: The current menu includes an arugula salad with apples, dried cranberries and goat cheese. It is open for dinner only, Tuesday through Sunday, and when the weather turns warm–as it eventually will (really, it will!)–you can stroll on down and dine under the patio umbrellas. An Italian holiday close to home.

So take a look at our full slide show below. And if you haven’t done so already, take our survey on dining out in Verona. It’s a sector of the Verona economy very close to Tom Malanga’s heart.