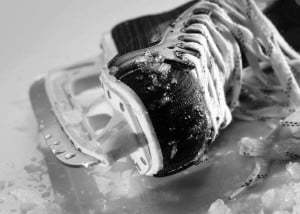 To keep their playoff streak alive, the No. 10 seeded Verona-Glen Ridge Hockey team pulled out a 2-1 victory over Summit that came down right down to the wire.

After a scoreless first period, Glen Ridge junior Matt Lander brought the puck down the ice and fed a pass to senior Co-captain Nick Martell, who scored on the play to give VGR a 1-0 lead over seventh-ranked Summit.

Despite a four-minute double minor for roughing, VGR had an outstanding penalty kill and helped keep the puck out of the net.

VGR’s second goal of the night was again scored by Martell on a power play in the third period.

With a little over a minute left to play, Summit’s Jeff Wyckoff scored; however that was not enough to defeat VGR as they will roll into the next round of playoffs.

Not only was Martell’s effort flawless, Junior goaltender Matt Brehne of Verona could not have had a more perfect game, stopping 21 of 22 shots. This was arguably his best game of the season.

VGR’s next game will be this Sunday at 2 p.m. at the Mennen Arena in Morristown, where they will play Brick, a team that is ranked No. 2 in the Public B conference. Click on the map below to get directions to the game.