One Up, One Down In Hoops Playoffs 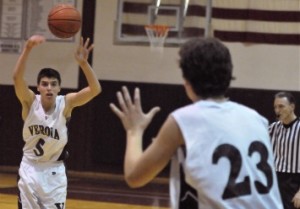 Verona’s boys and girls basketball teams both took on Ridgefield Tuesday night in their first playoff games. And though both Hillbilly squads were favored to win, only one did–but it wasn’t for lack of trying.

The boys teams had been within four points of each other or less for most of the game. But with Ridgefield in the lead 59-56 in the final seconds of regulation play, some Verona fans actually got up to begin leaving, their hearts heavy.  Then hearts nearly stopped as Brian Farrell, who put up 27 points in one of his best games all season, hurled a three pointer at the buzzer that sent the game into the first of two overtime periods. Verona scored first in overtime and almost took the game, until Ridgefield’s Rudy Chavez answered with his own three-point bomb, tying the game up at 65-65. The second overtime went Ridgefield’s way, unfortunately, especially on the free throws. 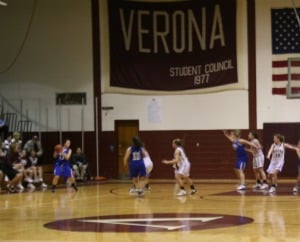 The Verona boys had gone into the game, officially the NJSIAA North Jersey, Section 1, Group I tournament, as the No. 2 seed; Ridgefield was way down the rankings at 15th.  In addition to Farrell, Bobby Kaslander also had a strong game, scoring 23 points (10 of them in overtime) and grabbing 14 rebounds. But Ridgefield had three scorers in double-digits: Chavez, Eddie Cordero and Chris Shultz. Final score: a heart-breaking 75-71, with Ridgefield on top.

It was a much different scene for the girls, who were coming off a tough 56-36 loss to Montclair Kimberley Academy. Amanda Langan shrugged off every ounce of jet lag from visiting her sister Tess in Africa and led the team with 17 points and 13 rebounds. Kara Bartow had 13 points, while Donna Jo DiNorcia was on fire with 12 points, six rebounds, five assists and three steals. The Verona girls led the entire game, which ended 52-31.

Bob Thomas took these shots of the boys game.