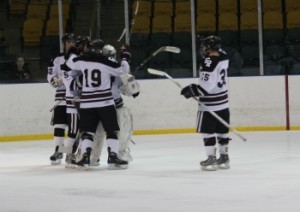 On a night that could have been the last high school hockey game of the year, the Verona-Glen Ridge Hockey team stepped up and beat Old Tappan 7-3 to ensure another game.

Old Tappan’s Alex Wright was the first to score in the second. However, Junior Matt Lander of Glen Ridge quickly answered. Wright put another one on the board for Old Tappan, but Polis and Lander brought the pressure and each scored another goal to make the score 5-2 at the end of the second period.

In the third period, Old Tappan’s Nick Scacangella made one last effort with his goal early in the period. After this goal, VGR never looked back. Despite being down a player, VGR’s Martell scored unassisted to put the score at 6-3. Polis had the final say when he sniped one to the back of the net with five and a half minutes remaining in the game.

Although allowing three goals, Junior Matt Brehne of Verona was spot-on h,aving 25 saves for the night. VGR was able to dominate on seven of their 41 shots on goal.

VGR is now headed into the second round of the state playoffs. That game has yet to be determined.