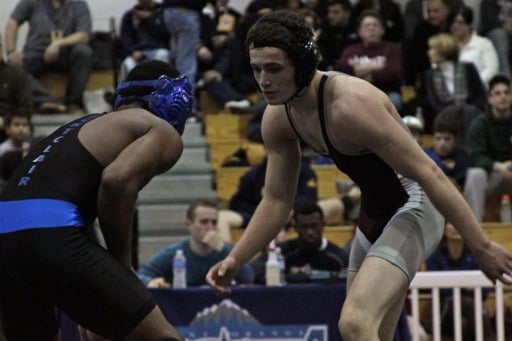 The Verona High School wrestling team dropped six of seven matches on Friday night in the quarterfinal round of the Region 4 wrestling tournament at West Orange High School. The only winner for the Hillbillies was returning state place winner Colin Farawell, who had a first period pin of his Lyndhurst opponent.

All of Friday night’s losing wrestlers still have a shot at advancing to the third place consolation match through wrestlebacks but the road now becomes more difficult: One more loss and they are out of the tournament. If they win, however, the third place finishers will advance to the state tournament finals in Atlantic City next weekend.

In the quarterfinals, Tom Cundari at 140 lbs went up against top-seeded Michael Paskas from Rutherford and lost by decision. Captain Craig Cundari drew second-seeded Francisco Colon from Saint Peter’s Prep and lost by a fall in the second period.

Taylor DelColle dropped a heartbreaking 3-2 decision to Ahmad Bidas of Clifton on a borderline call with only seconds left in the bout. DelColle had what appeared to be a 2-point reversal with about 30 seconds left in the match that would have given him a 1-point lead but he was never able to fully secure the reversal. Bidas was able to scoot around and come out on top to maintain his advantage and ride DelColle out for the win. Sophomore Frank Greco was next up at 171 lbs in a rematch of the district semifinal against third-seeded Paul Cafone of West Essex. Cafone secured a first period fall with a play that was set up by an aggressive Greco.

Colin Farawell continued to roll through the competition at 189 lbs. He secured a first period fall off his patented dump. Farawell appears to be headed for one of the most anticipated finals of the tournament against No. 2 seed James Fox of Saint Peter’s Prep. The evening was closed out for the Hillbillies with an agonizing defeat at 215 lbs. Anthony Parra lost in overtime to Jack Pohlman of Passaic Valley. Parra had tied the match up with a takedown on the line with only 2 seconds left to send the match into overtime. Parra was then taken down in the first overtime period for a 5-3 loss. Last weekend, Parra won the district 13 championship in which Polhman finished 3rd.

Verona did have one other wrestler advance in the tournament. James Kellner, who resides in Verona but wrestles for Saint Peters Prep, won a hard fought match at 140 lbs against James Barrett of Kearney. Kellner, the fourth seed, will wrestle top-seeded Michael Paskas in the semifinals this morning at 9 a.m.

Previous article
Where In Verona Is It? Canine Designs
Next article
Essex County Choral Festival