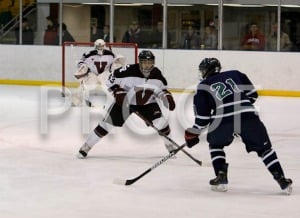 Thirty eight seconds into the game, MKA’s Alex Morse scored their first goal of the game. Within a few minutes, VGR senior and Co-captain Alekos Polis went coast to coast to score on a power play and even the game at one apiece.

MKA would go on to score two more goals in the first period and the first goal of the second. Freshman Dylan DeCandia of Verona scored VGR’s only second period goal. This was the second power play goal for VGR. They only capitalized on two of MKA’s six penalties.

MKA scored two more goals at the start of the third period. The next VGR goal came with about three minutes left in the game. Senior and Co-captain Nick Martell of Glen Ridge scored shorthanded to make the score 6-3. However, a goal from MKA’s Eddie Haracz shortly followed.

Glen Ridge Junior Matt Lander scored with about a minute left in the game. His last ditch effort was not enough to help VGR push forward into the final round of the playoffs.

MKA is headed to the McInnis Cup Conference Championship against West Essex, a team that scored two unanswered goals to beat Nutley in the game prior to VGR’s. This is the second year in a row that West Essex will be in the conference championship game.

VGR is still in the state playoff race. That game has not yet been scheduled.