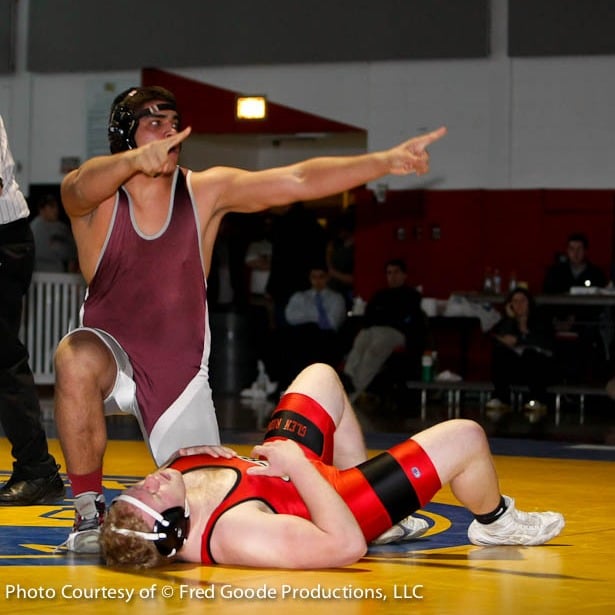 Anthony Parra’s body language in that photo pretty much tells the story. The Verona High School wrestling team went to the District 13 tournament on Friday and Saturday and came away with one amazing weekend. Seven of the 13 Hillbilly wrestlers placed in the tourney, the most ever for a VHS team. And three of the seven, Parra, Colin Farawell and Taylor DelColle won district championships in their weight classes, another first for the team. Together with Paul Scully, Tom Cundari, Craig Cundari and Frankie Greco, they are heading to the Region 4 tournament, which begins tomorrow.

There was strong wrestling across the board. Parra, a senior heavyweight, was in payback mode, deftly defeating George Christian in the semi-finals with a takedown in the final seconds. The West Orange wrestler had bested Parra at the county tournament in late January. In the finals, Parra triumphed over Sean Clarry of Glen Ridge with a pin at the three-minute mark. Colin Farawell needed even less time to nail down his 37th win this season: He pinned Windsor Guzman of Caldwell in 1:44. And in one of the high points of the Saturday matches, Verona senior Taylor DelColle triumphed over Nicholas Andriani of Passaic Valley, the No. 1 seed in the 160 pound group. DelColle won the match 2-1 in overtime, becoming Verona’s first district champion at 160 pounds and earning a major bear hug from his coach, Don Morgenroth. DelColle, Farawell and Parra earned themselves a bye in the first round of the regionals.

Greco earned a third-place finish by pinning Robert Novak of Passaic Valley in 3:40. It took Tom Cundari just three seconds longer to pin his opponent for third place, Jimmy Avraamides of West Essex. Brother Craig Cundari pinned his opponents in the opening rounds, before being pinned himself in the finals by Frank Marotti of West Essex. And freshman Paul Scully once again proved that he will be a wrestler to watch for the duration of his high school career. Scully, who wrestles at 103, pinned Tom Nealis of Cedar Grove in the Friday semifinals at the 4:14 mark. On Saturday, he lost 6-4 after a valiant effort to Michael Della Riva of Caldwell.

For many observers, Verona’s strong showing this season is a testament both Morgenroth’s direction and the fact that many members of the high school team have been wrestling together since elementary school, thanks to the Verona Junior Wrestling program. And it seems likely that that program will produce wrestlers to watch well into the future: The program’s varsity team, mostly fourth through 8th graders, has a 12-1 record, the team’s best season ever in the Suburban Junior Wrestling League.