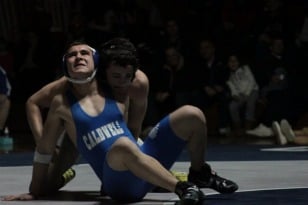 The Hillbilly wrestling squad fell to top seeded Caldwell, 41-26, in a state semi-final match-up on February 9 in Caldwell. With two starters out with injuries, Verona needed to wrestle a near perfect match to advance to the sectional finals. The Caldwell match was the first time that a Verona High School wrestling team had advanced to the second round of the state tournament, after defeating Hasbrouck Heights earlier in the week.

The match started at 125 lbs. with a Caldwell pin. Mike Randall got the Hillbillies back on track with a last second reversal at 130 lbs. for a 9-8 victory. Caldwell was able to win three of the next four weight classes to take a commanding 23-7 lead.

But Verona was poised to mount a comeback. A major decision by Captain Craig Cundari cut the lead to 23-11. A tough overtime loss by Taylor DelColle at 171 lbs., a fall by Frankie Greco and a forfeit to state placewinner Colin Farawell cut Caldwell’s lead to 26-23. In the match of the night, senior Anthony Parra moved up to heavyweight and won a thrilling 3-2 overtime win to tie the score at 26-26.

To break the tie, the squads went back to the lower weight classes to wrestlers who hadn’t yet been on the mat. At 103 lbs. freshman Paul Scully wrestled extremely well against county runnerup Mike DellaRiva, dropping a 7-3 decision. But Caldwell would never look back, getting pins in the final two matches to secure the victory 41-26 and move on to the sectional finals.

While the loss was disappointing, the season was far from over for the Hillbilly squad: On Friday night, they won the league title by defeating Millburn.

VHS student Adrian Amador was at the semi-final and took these pictures.
[imagebrowser id=81]