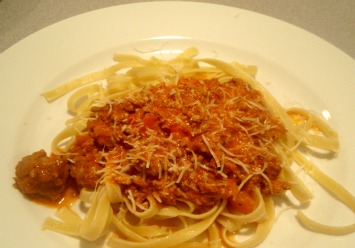 I love a good Bolognese sauce, especially in the winter. Historically I’ve always made it on the stove. This involved cooking ground meat, adding a little homemade sauce and throwing it on pasta.

Only recently have I learned that there are actually recipes for it and even some for the slow cooker. So, as my Crock Pot has become more and more my saving grace on busy days I thought these recipes were worth exploring. My challenge: each recipe I looked at used different meats, different cooking times and slight variations in the other ingredients like red versus white wine or milk versus cheese.

Thus began my journey into the world of better Bolognese. I used three different recipes to start my experiment and a combination of these gave us a family friendly easy to make dinner!

What’s Next
Coarsely chop onion, carrots, and garlic and then finely chop them in a food processor for about 12-15 pulses and set aside.
Brown meats (breaking up with a spoon as it cooks) in a large Dutch oven until no longer pink. Drain on paper towels to remove grease. Place in slow cooker.

If necessary, add a little olive oil to the Dutch oven and brown vegetables with a healthy dose of Kosher salt, pepper, and Italian seasoning. When vegetables are lightly browned and soft, add to slow cooker.

Pulse tomatoes with liquid in a food processor until smooth. Add to slow cooker and stir all together.

Add red wine and tomato paste to slow cooker. Stir all ingredients together. Cover and cook on low for 7 hours or high for 4 hours.
About 30 minutes prior to serving, stir in cream cheese . Cover and cook for another 30 minutes on low.

Serve over pasta. I used fettuccine.

Notes from my experience