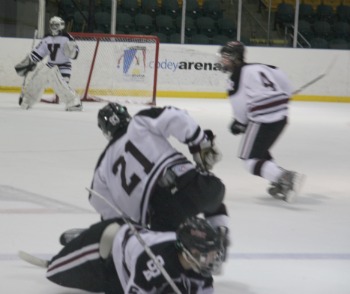 Fresh off a 6-4 loss against West Essex, the Verona-Glen Ridge Hockey team came hungry and ready to play for a win on the night that honored their seniors.

A pre-game ceremony was held in which all seniors took pictures with their parents on the ice. Their interests and future plans were announced as well. Verona seniors include Joe Fitzmaurice, Greg Schiffenhaus, Rob Serafino, Connor O’Neil, Dan Bryan, and Rocky Guidicipietro. The Glen Ridge seniors are Nick Martell, Alekos Polis, Spencer Cohen and David Paccione.

VGR faced Livingston, a team whom they tied 5-5 in the beginning of the season, for the second time. The night started off strong with Co-captain Polis tacking on a goal early in the first. He also had four assists for the night. After his goal, the juniors stepped up to the plate. Matt Lander of Glen Ridge had a hat trick and Max Linnett also of Glen Ridge, who had two assists — all in the first — put another one in the back of the net. Polis’ goal, and the first of Lander, were both power play goals. VGR had a 5-0 lead exiting the first.

Two more power play goals were scored in the second by Lander who had three assists with his four goals and Co-captain Schiffenhaus to tally up the score at 7-0. Saving 17 of Livingston’s 19 shots, junior goaltender Matt Brehne of Verona had another stellar game; however, Livingston’s Mike Philpott and Jonny Garfinkel each scored during the second.

As in the first, the third period was all VGR with Schiffenhaus scoring two more goals, putting his total at three on the night, and Guidicipietro scoring his first ever varsity goal. With these three goals, the final score of the night added up to 10-2. VGR was able to capitalize on four of Livingston’s many penalties. Despite the fact that VGR had a flourish of penalties in the third, they were able to keep the puck out of their zone. Verona’s Serafino left the game with a few minutes to go in the third on 10 minute misconduct penalty.

Overall, Serafino had two assists as did Co-captain Martell of Glen Ridge. Sophomores Ryan Flood of Verona and Michael Lloyd of Glen Ridge, Verona freshman Dylan DeCandia and Glen Ridge’s Paccione each had one.

VGR’s next game is against Montville on Wednesday, February 9 at Codey arena. The start time is 6:15 p.m.