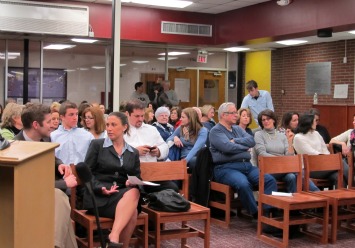 Some four dozen parents and several Verona High School students packed last night’s Verona Board of Education meeting to hear about a proposal to make significant changes to the curriculum at VHS. The proposal would eliminate two honors classes in English and one honors class in social studies, end barriers to entry into advanced placement classes and introduce both new content and higher standards in the high school’s basic college prep classes. If approved by the BOE later this winter, the changes will also rename several classes and add both a college prep physics class and AP statistics.

The changes are being driven in large part by poor performance on several key standardized tests, results that both Verona Superintendent Charles B. Sampson and BOE President John Quattrocchi called “troubling”. Of the 46 so-called “I” districts with high schools in New Jersey, VHS finished 46 out of 46 for the percentage of students scoring advanced proficient on the 2010 High School Proficiency Assessment in language arts and 44 out of 46 among these districts for students taking the math HSPA. The HSPAs are state tests given to 11th grade students to measure whether they have mastered what the state feels they should know by that time, the Core Curriculum Content Standards.

The plan also noted that, in 10 “I” districts that most closely resemble Verona including Glen Ridge and the Caldwell-West Caldwell schools, a greater percentage of students take AP classes and exams. The AP tests have been developed over the last 50 years by the College Board, an independent education group that has sought to get high school students to engage in college-level work. According to the College Board, more than 90% of the four-year colleges in the United States will give students credit or placement in higher level classes if they score well on the AP exam. That has the potential to save parents thousands of dollars in college costs.

But it is difficult, and in some cases impossible, for students who were not on an early track for advanced work to qualify for AP classes, barriers that Sampson called “arbitrary”. The plan would end entrance exams for the classes and teacher-imposed cut-offs and instead look at a student’s larger school record. “We think that there are a ton of students in this school that if given opportunity to take these classes, will exceed the expectations that we would have held,” said Sampson. “If you look at schools that have made leaps in achievement,” he added, “they eliminated barriers to high-level classes and the kids rose to the challenge.”

Elizabeth Toriello, director of instructional studies for the Verona public schools, noted that there has been very limited curricular oversight in Verona since the mid-1990s, which has led to curricular gaps, course repetition and overlaps. Verona has been working out the kinks at the elementary school level with new writing and math programs, and shifting courses to the middle school from the high school. And Toriello repeated the BOE’s belief that, while it should not be teaching to a test, test data indicates that Verona needs to make corrections to its system.

The proposed changes will not affect the current juniors and seniors, but would be applied beginning with the current sophomore class, the class of 2013.

The meeting, which ran past midnight, seemed to do much to allay concerns about changes to the AP classes that had been circulating in e-mails among parents for the past two weeks. And the plan to raise the content of the college prep classes met with no objections from the assembled crowd, several of whom said their children had not been adequately challenged in these classes. “One of the biggest concerns we have is for the college prep kids,” said Patrick Higgins, Verona’s supervisor of humanities. “We feel we could do a much better job of meeting their needs. We will be completely modernizing and revamping our college prep curriculum. We want to make sure that our college prep kids are prepared for what lies ahead of them.” Higgins said that, while the classics would continue to be taught, the new curriculum would  emphasize non-fiction to a greater degree than in the past.

But the crowd urged the BOE to not heed the plan’s recommendation to end the honors classes. There was strong feeling that the honors classes offered a vital mid-point between the college prep classes, however improved, and the rigorous and time-consuming AP classes. “You are tampering with something that is a success,” cautioned Jane Eliasof, the mother of a current VHS junior. VHS senior Emma Newkirk asked what would happen to the credit given to student who take an AP class but do not take the AP exam. Under current policy, these students get honors credit for their work. Sampson conceded that the schools have not worked out a policy on that scenario yet, which Toriello later said does not happen very often.

There will be another presentation of the curriculum changes at the 8th grade parent orientation at the high school next Monday, and Quattrocchi said the BOE welcomed further feedback. The changes will be presented as a resolution some time in February.