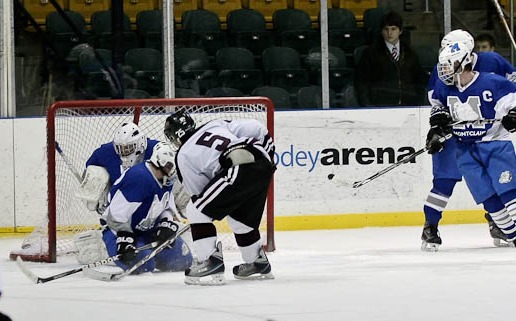 Cheers from the crowd could be heard throughout the arena. People jumped off their seats in celebration, as the first–and final–goal of the Verona-Glen Ridge Hockey team’s game against division opponent, Montclair, was scored.

With 1:12 left in the game, junior Matt Lander of Glen Ridge put one past Montclair’s goaltender, Brendan Gaetjens, for the game-winning goal.

With the help from seniors and co-captains Alekos Polis and Nick Martell, Lander was able to get the puck in their zone and finally score, something VGR struggled with all night, despite having 39 shots and dominating the offensive zone.

VGR goaltender, Matt Brehne of Verona, had a perfect night, stopping 16 shots and getting his second shutout of the season.

Unfortunately, one of VGR’s top defensemen, senior and co-captain Joe Fitzmaurice of Verona, endured what looked like a painful injury and had to be taken off the ice. Coach Andor Kish said after the game that Fitzmaurice will be OK.

Adding this 1-0 win to VGR’s record, they sit at 12-3-2 overall and atop their conference. Their next game is tomorrow at 3:45 p.m. at Codey Arena against Millburn.

Fred Goode captured the game-winning shot and the slideshow below.
[imagebrowser id=69]