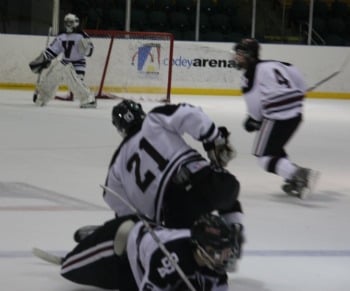 After winning three straight games, the Verona-Glen Ridge Hockey team failed to make it four with a 7-4 loss to Westfield on Monday afternoon.

In the second period, Polis had another goal and an assist on Glen Ridge junior Matt Lander’s goal. These goals were scored in 50 seconds to give new hope for VGR, which was trailing 3-1.

Coming into the third with a 4-3 lead, Westfield never looked back. The only flaw Steve Wronski, the Westfield goalie, had in the third was letting senior and co-captain Nick Martell beat him on a breakaway goal late in the period to give VGR their fourth and final goal of the night.

In the game, Westfield’s CJ Meyer had two goals, as did Attanasia.

Despite the loss, VGR Assistant Coach Joe Guancione feels the team has much potential. “They can be as good as the ’08-’09 team,” he says. The ’08-’09 VGR team went all the way to the Frozen Four and was one win away from being in the Public B State Championship game. That year, they also won the McMullen cup in the Northern White Conference championship game.