The Tale Of The Tape 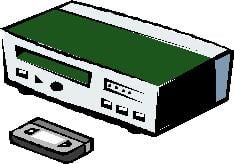 Problems happen. And when they do, there is usually a simple explanation of why they happened.

So it is with the video of the November 15 Town Council meeting, which stopped during the public comment portion of the meeting. Elizabeth Knoop, one of the leaders of the tax protest group in Verona, sent a strongly worded letter to newspapers implying that the cut-off was a deliberate action on the part of the Council. Her letter read in part:

“…the town council and the township manager, Joseph Martin, go out of their way to avoid any public forum to answer questions, whether it is email or the town council meetings. Especially egregious  was the council meeting on Nov. 15 where they not only exhibited their usual resistance to address issues and answer questions, but also cut off the video tape in the public portion of the meeting so no record of their behavior would be available.”

This morning, a deeply embarrassed Jeff Hayes, the director of Verona’s technology department, explained what happened. It is an answer that will be very familiar to any parent who has forgotten to check the FIOS box before their kid’s favorite show needed to be recorded.

The Town Council meetings are recorded on a DVR so that they can be made available to VTV (the public access cable channel) and copied to a disc that can be viewed at any time in the Verona Public Library. Unbeknownst to Hayes, the DVR’s hard drive was close to full when the meeting began and simply stopped recording when it got to 100%. Hayes was not aware that it had stopped recording. He has now implemented a schedule for clearing off old meeting tapes, which had been stored on the DVR. “It was my fault,” he said.

Knoop responded by e-mail to messages left by MyVeronaNJ seeking comment. “Thanks for following up,” she wrote. “I can’t comment as I don’t have any expertise in that area.” Town Council meetings are broadcast on VTV, which is Comcast channel 35 and FIOS channel 24.