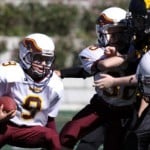 The Eagles A Team opened the season with a disappointing 19-12 loss to Livingston. Since that game, the Eagles have rolled to four consecutive victories, the latest, a 20-6 win over the Florham Park Falcons. Steven Kellner started the scoring by catching a 15-yard TD pass from Frank Ferrari down the left sideline. Special teams stepped up big for The Eagles, as several players had a hand on a blocked punt that Brian Valentine picked up and returned to the Falcons 28-yard line. Ferrari then completed a pass to Jimmie Crawford, who was knocked out of bounds on the 3 yard line. Mark Bennett powered his way into the end zone for the touchdown and the Eagles led 12-0. The Falcons made it a game by scoring on a long run, and the Eagles lead looked to be in jeopardy as Frank Ferrari limped to the sideline with an injured knee. Matt Zebrowski, playing his first game since returning from a shoulder injury, replaced Ferrari. He led the Eagles on the final scoring drive of the game which was capped by a Jimmie Crawford 12-yard touchdown run. Brian Liggio successfully kicked the extra point. Liggio and Ryan Cariani would add interceptions to preserve the lead. Steve Lupo’s Eagles have a bye week this week, but then face the undefeated Nutley Raiders in Nutley on Sunday, October 24.

The Eagles B-Team rolled to a 26-0 win over The Florham Park Falcons on Sunday at Centennial Field, improving their record to 4-0-1. Zach Zaccone completed a 30 yard pass to his brother Matt who was brought down on the 12 yard line. Chris “Aldo” Aldiero powered his way into the end zone on the next play to give the Eagles the early lead. On the Eagles next possession, Mike “Mugsy” Mughetto caught a screen pass and ran it 45 yards to pay dirt. Zaccone ran in the extra point. On the Falcon’s next possession, Matthew Gautieri hit the Falcon QB as he delivered the ball and Mughetto picked it off and weaved his way to the end zone. Mughetto capped the day’s scoring with a 42 yard TD run. Coach Ed Shields worked late into the night on Saturday and it paid off, as his defense recorded their 4th shutout in 5 games. After a bye week, the Eagles will travel to the Oval in Nutley to play The Nutley Raiders on October 24.

The Eagles C-Team improved to 5-0 Sunday with a 22-0 thrashing of the Florham Park Falcons. Jack Gautieri had a quarterback sack on the first defensive series forcing the Falcons to punt. Matthew Frungillo returned that punt 50 yards with the game’s first score. Tom Sharkey passed to Anthony Zamloot for the 2-point conversion. Frungillo wasn’t done. Following another long punt return by Sharkey, Frung scored on a 2-yard dive. The final scoring play of the afternoon came on a Sharkey to Zamloot 15-yard pass. The second half was devoted to defense. Matthew Aldiero made three tackles including two for losses. Nick Giuliano had a hat trick of turnovers, recovering a fumble and intercepting two passes. Coach Bob DiTrani’s team will have a bye week, and then travel to Nutley for a tussle with the Raiders on October 24.

The photos below were taken by Deb Aldiero and Donna Giuliano.
[imagebrowser id=12]