Ripper’s In The House 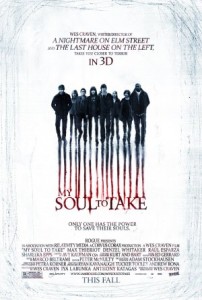 If you go to see the new Wes Craven film, “My Soul To Take”, when it opens tonight, just keep this one small thing in mind: The actor who plays Ripper is one of your neighbors, Verona resident Chris Place.

Place, a stunt man by background, has learned to not talk up his scenes until he has made sure they haven’t been cut in the editing. And what he saw when he and his wife attended the movie’s premiere on Wednesday night in Manhattan pleased him very much.

“It was a blast,” Place says. “The film was pretty darn good for a slasher movie. I think teens will love it. It reminded me of when “Scream” came out when I was in high school. The writing was great. It’s a very psychological thriller. Not so much a horror. They didn’t glorify the killings for a reason, and I think that  worked. It was in 3D which looked great”

Place, who just finished filming “Premium Rush” with Joseph Gordon-Levitt, is officially credited as the Ripper in “My Soul To Take”, which doesn’t always happen either. His name isn’t on the poster, but it is in the credits in the film’s listing on IMDb.com, the industry’s video record.

“I am covered in makeup and hiding in the shadows most of the time,” Place says, “but I did make the audience jump at a few points which was fun!”