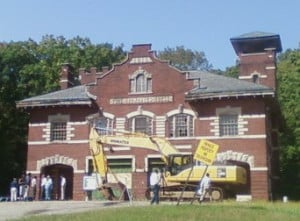 Take one good last look at the old firehouse on the Essex County Hospital Center grounds on Fairview Avenue. By the end of the year, it–and all the other buildings to the west of Fairview past Verona Pool–will be dust. Essex County Executive Joseph N. DiVincenzo, Jr. announced today that K. Hovnanian Homes will soon begin to demolish the structures. The buildings have been vacant since 2007 and DiVincenzo said the county had become concerned that they presented a safety hazard; trespassers and vandals have been frequent visitors to the structures.

So here’s what might happen next. Parcel #1, as the western side of Fairview has been designated, could be turned into a 20-acre park that gets added to the existing Hilltop Reservation. Parcel #5, a 90-acre site on the eastern side, could be split 50-50 between development and parkland. The land closest to Verona Pool, where a half-dozen buildings have already been torn down, could also become parkland.

But this grand plan hinges on a vote by the Cedar Grove town council on Monday night about giving K. Hovnanian Homes, which owns Parcel #1, the right to build townhouses on Hilltop property in the town. It also depends on the resolution of a lawsuit between the county and Hovnanian over Parcel #5. As they say in TV-land, stay tuned.